As I write today’s update, I am once again reminded of the sovereignty of God. We as humans struggle, stress, and agonize, often about things over which we have no control, yet as true followers of Yeshua / Jesus we have direct access to the One who does. It is our sovereign Lord we must trust in all things and so we take the things that challenge us and, with total submission to Him, lay them at His feet.

Be anxious for nothing, but in everything by prayer and supplication, with thanksgiving, let your requests let your requests be made know to God; and the peace of God, which surpasses all understanding, will guard your hearts and minds through Christ Jesus. Philippians 4:6-7

As I think about the wondrous things that God is doing in the Middle East through the House of Blessing and its hundreds of missionaries, thousands of students taking the H.O.B School of Ministry course, and the hundreds of thousands of Christians which have become part of the underground Church throughout that part of the world, I am long past being astonished! I think a better way to put it is that I am awestruck—not at what people have accomplished, although there is no questioning the loyalty and commitment of everyone involved, but rather at how God has orchestrated this harvest from its very beginning to the writing of this Mideast Update. He planned it, empowered it, and will complete it…just as He purposed! Our God is amazing!

I received a call from Pastor R a couple days ago and he told me of at least 5,000 of the current students of the School of Ministry, along with teachers and volunteers that were fasting during the observance of the Jewish Yom Kippur / Day of Atonement. We might miss the significance of this fast during Yom Kippur until we stop to remember that these people had been Muslims all their life until Yeshua opened their eyes to the Truth of who He really was. How amazing is that?

These 5,000 mainly included the students who were reached through Sister Sarah’s evangelism team and the three large groups of students that were being taught by Same, Omar, and Nader. As you remember, these men were recently gunned down with brother Nader losing his life instantly. As introduced to the readers late in September, the instructors who have been handpicked and trained to take their place are brothers Hesham, Tallat, and Assem. I don’t know the names of their assistants yet.

Many have asked about the status of Omar and Same. They are both in the hospital and are recuperating. Their wounds have been properly treated and they are receiving heavy doses of antibiotics, as well as treatment for the diabetes which was not allowing their wounds to heal. We look forward to them being restored back to the ministry they so love. 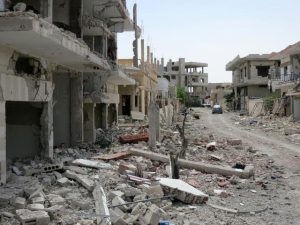 As we watch the current news coming from the Mideast, we must remember to keep our brethren in earnest prayer. The killing has not stopped and is not likely to now until the Prince of Peace comes to take control over this world. Whether it is in Idlib province, the city of Aleppo and the surrounding area, Homs province, the Damascus area, Mosul or Fallujah, Kurdistan, or Iraq, the turmoil continues. Whatever the situation the missionaries find themselves in, they continue to trust the Lord to give them the strength to finish the course He has called them to. Civilians are still dying, some starve to death or die of the elements. The HOB missionaries do everything they can to reach them before they enter eternity. You and I may not be able to minister by their side, but we can certainly pray for them and we can support them. Indeed, it is our privilege to do so!

NOTE: Photos do not necessarily directly connect with the storyline but are from my photo files to give some idea of the conditions on the ground where the HOB missionaries are serving.

Sisters Fatwa, Mufiedah, and the Widow Sisterhood had 28 seriously injured people brought to them this last week. Just as they have been doing for a long time now, they ministered to them physically and then brought them to the feet of the Messiah as they submitted to His Lordship. Every week there are more. What a harvest of souls it has been! Tragically, Mufiedah reported four more missionaries lost their lives while evangelizing.

The communion services have also continued, although they are pretty short on supplies. The Lord made it possible for them to serve at least 230 in northern Syria and another 270 in the Fallujah area where Sister Fatima is. Also in Fallujah, there were another 80 who were brought into the Kingdom of God. Sadly, two more House of Blessing missionaries were martyred. 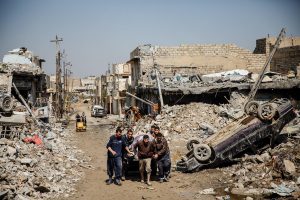 The reports coming from Akram and Mustafa tell of another 350 reached with the Good News of Jesus. Also, the missionaries were able to get another 45 of the dead buried. It has been a long and very difficult task to get people buried, especially since many have been dead for an extended period of time.

In all areas, all HOB missionaries are quite aware of the shortness of time. Every soul is seen as someone that might never be seen again. Every week, there are more that are brought into the Kingdom. The 12 men Pastor R trained personally report that the Lord led them to 130 more that committed their eternity into the hands of Jesus Christ. Day after day the harvest continues. As the new Christians become trained in God’s Word, they begin reaching people themselves. The multiplication happens very fast! Because of this, Bibles are always in very short supply. At this time, the House of Blessing is asking the Lord to provide 2,000 more Bibles. This is an area where we can all participate. There is no greater investment we can make than to give towards providing Bibles to those who would so much love to have one. Most of these folks have never even seen a Bible. 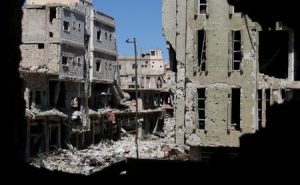 A story was told this last week that I found inspiring. A man, named Mahmoud, came across Sister Mufiedah and those working with her and they were able to lead him to the Lord.  Mahmoud told them that about two months prior he had come across a dead man who had a Bible clutched against his chest. He removed the Bible from his hands and then, after burying him, he took the Bible home with him. For the weeks following, he and his family read this wonderful Book and were fascinated by what they found written between its covers. Because they knew nothing about Christianity, they did not know how to pray the sinner’s prayer, and since they knew no one to ask, they just kept on reading. As Mahmoud told his story, he broke down in tears and recounted how his home was hit by a bomb while he was out. He said that most of his family were killed in the attack. He shared how he wished he had been able to help his family pray for forgiveness as the widows taught him to do. It is a sad story, yet it is a story of great hope. We don’t know how the Judge of the Earth will judge Mahmoud’s family members but we know He will judge justly. But Mahmoud’s story also tells us that the Bibles that have been distributed all over the Middle East are being read. In fact, they are cherished as a most valuable possession for those that are privileged to have one. I am reminded how the Lord promised 5 ½ years ago that He would bring much fruit from every single Bible that is purchased and distributed among the people. God has done that, and in great measure!

Many miracles are more common among the missionaries than we expect here in the West.  Even this last week, as 5,000 Bible students were taking their intensive Bible courses, the one meal a day that the House of Blessing was providing for them never seemed to run out. Even though it always looked like there would not be enough, everyone always had as much to eat as they wanted! This open display of God’s love for His people did much to build the faith of these new believers! 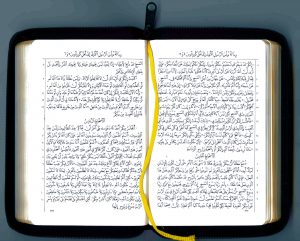 In closing, all of the House of Blessing missionaries want to thank every person that has prayed for them, and continues to pray for them day after day, as well as those who have given financially and from the heart as God has directed. God answers the prayers of His people, oftentimes through his people! The need for 2,000 Bibles is a very large one, but we serve a very big God! Let’s make sure not to miss the opportunity of this hour, because it is passing more quickly than we might think.