Pastor R called me the other day and shared details of another extraordinary story for me to share with you. Just before I do, I would like to refer to a passage written by the prophet Ezekiel. He described a most extraordinary vision; he saw cherubim, the Throne of GOD, and saw a “MAN” which he did his best to describe, as well as his own reaction to what he saw…

I would like to have added more of the passage but it would have been too long for today’s purposes. Ezekiel here saw a sight so overwhelming that he passed out on the ground like a dead man. Others, like the Apostle John, Daniel, and Isaiah had also experienced much the same. The point being…the closer we get to GOD—the way He really is in His omnipotence, it often becomes more than our physical flesh can withstand. As Ezekiel lay there before the One who created him, GOD spoke to him, entered him with His Spirit, picked him up and set him on his feet.

(Sidenote): Did you notice that God was described as a MAN? A MAN clothed with the glory of the LORD? Think about that…  Fascinating..! 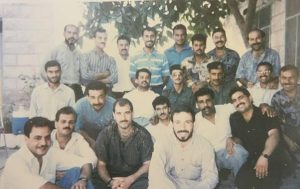 Some of the experiences the House of Blessing missionaries have had lately have been stunning, to say the least. These ‘flesh and blood’ brethren of ours have seen things; heavenly interventions that cause one to realize that God had come very close. They witnessed things that only GOD Himself can do, and He did so in response to the prayers of His beloved people! We can think we are spiritual, act spiritual, speak spiritual, dress spiritual; basically put on the whole “spiritual package” but still be dead in the water when confronted with the reality of the Glory of God! We must have His Spirit set us on our feet and anoint our walk before we can truly be of ‘“spiritual” use to God’s Kingdom.

Photo: Missionary widows praying for the sick to be healed 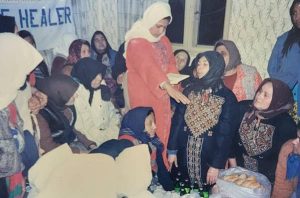 As the missionaries, Mufiedah, Sarah, and Fadwa were going from tent to tent, sharing with people, they came across a tent where a man’s wife had died several hours earlier of the cholera plague. What added to the tragedy was the fact that this woman had been full term pregnant but had not been able to deliver her child. She had become extremely weak and had expired before she could give birth. A grave had already been prepared for her and they were about ready to put her in the ground.

Mufiedah quietly listened to the broken-hearted man’s story and then asked his permission to see her. When he agreed, she bent down to check her vitals and confirm that she was really dead. Sure enough, she was not breathing, she had no pulse, and her body was already very cold. Mufiedah then asked if they would be allowed to pray over her. The husband agreed but asked what good would that do? She was already DEAD, as was now also the child! But, he allowed it.

The three women surrounded the dead woman, paying no attention to the grieving family members and other women present who were mourning with the family. Mufiedah first anointed the woman with oil and then began to pray over the woman’s body. They prayed with their understanding but also, as the Bible describes in the New Testament, in unknown tongues through the power of the Holy Spirit. As they prayed, the power of God began to go through their hands as they touched the woman’s head, and then her stomach. As they did, she began to breathe. Soon, she opened her eyes! The Lord healed this woman right in front of everyone present! Then, the women prayed over the unborn child. As they did, the woman began to have contractions and soon delivered a totally healthy little boy! This is their photo below, ten days after being raised from the dead. 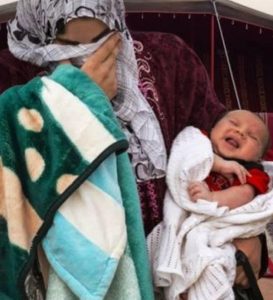 Mufiedah asked the woman’s name and found out her name was Sara. Pastor R told me that Sara is a fairly common name in the Middle East.

After things settled down a little, the husband (whose name I don’t have) asked what the women were doing going from tent to tent. They explained that they were doing what they can to help people in whatever way they were able. They were also telling people the Good News about Jesus and the free gift of salvation provided for the asking. It didn’t take long until the husband, his family, and an additional 25 women were brought into the Kingdom of God. They all bowed their hearts before the Lord, prayed the sinner’s prayer, and became followers of Jesus. What a day it turned out to be!

The photos I have added to today’s update were sent to me about ten days after the woman and child were raised from the dead. It is now about two weeks since it happened. I was told that when the father was asked what he was going to name the little boy, he was so grateful and overcome with God’s intervention in his family’s life that he decided to name the boy, Jesus! I know some might find this uncomfortable but it’s worth remembering that “Jesus” was also a common name. Other forms of the name ‘Jesus’ are James, Joshua, and other forms of the name. I don’t think the father in any way offended God. 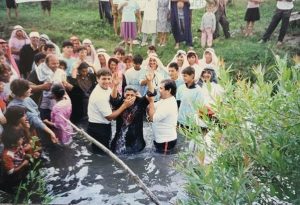 In closing today, I’ll just mention in passing that all of the HOB missionaries are continuing to go from tent to tent. In just my short listing I have reports of about 3,000 individual tents that were visited. The missionaries stayed between ½ – 1 hour in each. They shared the Gospel with all, prayed for hundreds of the sick, and shared what wheat and Oregano tea mix they could. Once again, a great harvest has been brought into the kingdom of God.

Just a quick word to the wise: There is still someone sending out derogatory emails, seemingly doing the best they can to destroy the ministry and reputation of the House of Blessing. There are also threats to the leadership, including to Pastor R. For those that have seen them, the emails are poorly written and are barely readable–at least, in English. I am praying that God deals with the source of all this. We are very, very near the return of our Messiah and Lord, Jesus Christ, and the kingdom of hell is desperate to do whatever damage it can to the work of the harvest of souls. The enemy cannot win but we need to stay vigilant. The apostle Paul made it clear that we as believers are not fighting against flesh and blood, but rather against principalities and powers of the fallen one. We know this well, but unfortunately it is people who often align themselves with the side of evil. We need to pray earnestly…I believe God for His interventions.