The situation in the Middle East continues to be desperate, both with the weather this time of the year and of course the much worse problem of dealing with all the missile and bomb attacks. The loss of life among the civilians continues unabated.

In the last few days at least 120 adult believers and 35 children from the House of Blessing community were killed. Among the large number of victims, there was a family of four that was just barely alive when the HOB missionaries found them. Having been around thousands of victims in the last few years, the missionaries were able to quickly assess that there was no way to save their lives. All that was left to do, short of a miracle, was to try to reach them with the Gospel of Jesus and the eternal life He offered. This family of four was very open to the message and they were quickly led in the sinner’s prayer by the missionaries. Within 30 minutes three had died but the fourth was still hanging on. When the missionaries approached him, he reported how he had seen God’s glory and the beauty of heaven’s paradise. He said that the other three of his family were already in the presence of Jesus and he had been allowed to return long enough to give the news to the missionaries. After this, he passed into eternity! What a wonderful story! Four people whose eternal destiny was turned 180 degrees within the last few moments of their existence on this earth, just because some believers told them about God’s love and forgiveness! Amazing. Praise God!

Many dead unfortunately have not been buried yet. Pastor R has advised against it for the time being for the sake of safety. The weather is cold and snow will cover the bodies. They will then be properly buried at the first decent opportunity.

Omar and Same spent a good deal of time helping refugees move their tents out of areas that had standing water to ground that was a little higher. Of course, when rains like this come and tents are found to be in low areas, everything gets wet, including mattresses, blankets, clothing, and everything else. As regular readers already know quite well, the missionaries have found it always opens doors to share the Gospel when they pitch in and help reset or move tents for the folks.

This last week, through gifts that have come in, 1-1/2 large flatbed truck loads of wheat were purchased and distributed among the desperate refugees. The Christian women then help cook large flat tortilla looking breads and many thousands are fed. And, once again, the doors are opened to share the good news of God’s love.

Pastor R’s specially trained twelve men found a large group of people that were in absolute desperate need of help. There were 5,500 families represented in this group, and they had NOTHING. No food, no supplies, mattresses, blankets, and barely enough clothing to cover their shivering bodies. The men then went to other refugee locations and asked help from thousands that were part of the House of Blessing community of believers. They went through their meager belongings and took one of everything they had two of, and gave to the needs of these 5,500 destitute families. They were able to gather enough to help them all. This is also where the greatest portion of the wheat was taken. The people that HOB tries to help are not being helped by the United Nations or any other relief organization. Refugees have learned that if they cannot find any other help, the HOB missionaries will do everything they can, even the clothes off their own backs. And…God multiplies everything! What a GOD we serve!!

Also this last week, Sisters Fatwa and Mufiedah were guided by the Holy Spirit to more of those with very serious injuries. Mufidah and the Widow Sisterhood ministered to 47 and Fatwa and the Widows ministered to another 53. Each of these were ministered to physically and then each one was brought to the feet of Jesus, as they have been doing for several years now. All are experiencing spiritual growth and healing.

Sisters Sarah and Hafezah came across a very large crowd that was running for their lives. Of these fleeing northern Syria, they were able to coax 350 into going to their refugee camps with them so that they could be cared for. These people have all been hiding in caves, bombed out buildings, groves of trees, or holes under collapsed or destroyed buildings. Now, they are with the HOB missionaries and most will be led into the Kingdom of God! 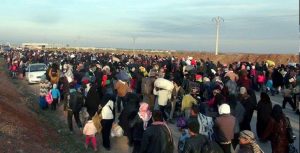 In Fallujah, there are now 320 new believers taking Bible classes. The missionary teachers are doing their best to help the new believers see the value in not getting involved in the sectarian politics. This is not because politics isn’t important but rather because only the return of the Prince of Peace is going to be able to straighten out the hatred that is being unleashed from the pits of hell in the Middle East in these crucial days just prior to the beginning of the Day of the LORD.

Also in the Fallujah area, the continuing miracle of Fatima and the miracle of forgiveness made possible through the love of God for Munser, is reaping a great harvest. Thousands are continuing to come to listen to these two saints of God. Brother Akram and Adel are kept very busy facilitating the training of the thousands that are so anxious to learn the Word of God. 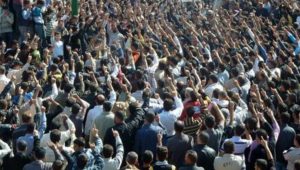 In many other areas, there are many more thousands taking Bible courses. Studies continue to be mass-printed and made available as the funds allow. There are reports of 800 in one location, 300 in another, 460 in another, 1,200 in another, and 700 in another. The number of Bible students in western Iran is now grown to 250. These numbers just represent a few of the locations. They are scattered all across Iraq, western Iran, Kurdistan, and Syria. Personally, I don’t know all the locations but there are many in each individual Mideast nation…all under the guidance and leadership of the House of Blessing. What God is doing is astonishing!

As talk of ceasefires among the many military entities involved continues, we can see by the photos in this article that the carnage and misery are continuing. In spite of the fact that Russia attests that the war has been won and they are preparing to take most of their military forces home, the Russian bases within Syria are being made permanent as this article is being written. 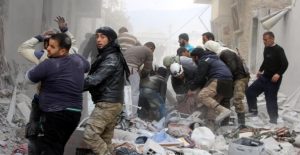 The United States is training at least 30,000 foreign troops in the Middle East at the present time. Turkey is moving troops and military equipment down to its border with Syria. Iraq’s military has taken most of the Islamic State’s territories that it had claimed for its caliphate. Iran and its Lebanese ally, Hezbollah, have taken over most of the territories in Syria that the Islamic State has been driven out of. Israel is feeling the noose tighten around its borders and will soon be forced to make a major aggressive move.

At the same time, the nations that the prophet Ezekiel said would attack Israel in the Gog and Magog war are already in place and it is no longer a question of if, but rather when, they will make their move. It is looking like Israel’s impending preemptive move will also set the Ezekiel 38-39 war in motion.

But until these things unfold, the emphasis of the House of Blessing missionaries is on souls. The Day of the LORD is imminent! Our KING is soon to come! Hallelujah!

For those that would like to help with this ministry in this late hour of this age, you will find a PayPal button below. Thank you from all of the House of Blessing! God is good!