Today, as I think about the Middle East and all the turmoil, I can’t help but agree with the Apostle John’s prayer in Revelation 22:20: “Even so come, Lord Jesus!” The turmoil in our world is increasing by the day and there is a longing growing strong within the hearts of true followers of the Messiah to be brought HOME where we belong…SOON! 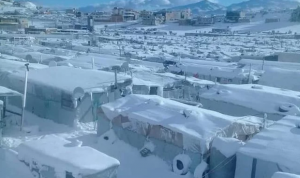 Those who have read these updates for any length of time know of the continual winter struggles for those who live in the refugee tent cities of the Middle East. The HOB missionaries, are of course embedded with them. The weather is becoming more and more unusual in many parts of the world; the Mideast being one of these areas. The winter storms are bringing abnormal amounts of rainfall, sometimes months of rain within a day or two. For people living in tents, this can be disastrous. The snow is often a greater problem yet as these photos from the border between Syria and Lebanon show. The need for prayer support for the HOB missionaries is continuous. Most of them have chosen this harsh lifestyle for only one reason…souls. We who are not on the front lines as they are should feel it a privilege to hold them up in prayer. 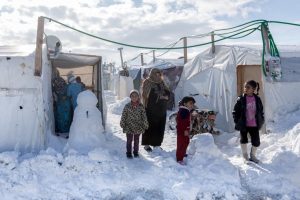 Deir ez-Zor, a province that has been in the news again in the last few days, is presently experiencing a large influx of refugees from nearby areas. The Al-Hole refugee camp is just one example of the mass-misery across much of the area. This particular refugee camp, which is already overcrowded with approximately 35,000 refugees, is been overrun with an additional 10,000 since the last week of January, and they keep coming. Those coming often have gone through very tough screening processes and have then been loaded up in open pickup trucks or flatbeds—usually at night. There is very little food and little to no protection from the elements as they take a trip through areas with explosive hazards along the road. The trip takes several hours from Hajin to the Al-Hole camp. The majority of these people are women, children, and the elderly.

Deir ez-Zor province has had a strong HOB Christian community within it for quite some time. Although the UN and other relief organizations are doing what they can, there are always hundreds who fall through the cracks. This is where the House of Blessing steps in and does what they can. Just as tents are having to be rebuilt, hundreds at a time in most locations, so it is in Deir ez-Zor province refugee camps. What is normally already a very difficult process becomes even more complicated with such a large influx of people coming so suddenly. Refugees, such as the 10,000 mentioned above, have nothing except what they can carry on their backs. They have to be processed and then squeezed in somewhere in order to get them out of the weather. Then there are the immediate needs like food, water, and medicine, which by then are at the point of emergency if there is to be any hope of survival. At least 35 children, including newborns, either died en-route or right after arriving at the Al-Hole camp–mostly of hypothermia.

Most of those pouring into the area are fleeing violence in Hajin, south of Deir-ez-Zor. Since November 2018, hostilities in the ISIS-held areas of Hajin have further intensified, with widespread reports of many civilian casualties. People fleeing the area have reported critical shortages of food and medical supplies, and large-scale destruction of civilian infrastructure. There is great concern for the civilians who remain trapped in the Hajin area. Not only are they endangered by the terrorists who still have control of many areas, but Hajin is also very close to areas of active conflict.

It seems there is never a lack of bad news, but then we also hear of events that have the miraculous hand of God on them. The story I am about to share is one of these.

One of the House of Blessing leaders, a man named Mahmoud, while in prayer with a group of men a few days ago (men who used to be influential Muslim sheikhs but now only consider themselves disciples of Jesus), felt that the Lord had spoken to him. He felt the Father wanted him to approach Pastor Farid and ask him to travel to Mosul with him and the group of men he was praying with. There was a mosque in Mosul that he had a connection with and he felt the Lord had asked them to go to this mosque in order for Farid to share his testimony there.

They went ahead and made all the arrangements and Mahmoud, 32 of the “disciples” and Pastor Farid traveled to Mosul. Some of these men are men we’ve become familiar with. Their names are: Mefliah, Radi, Taher, Shaher, Ziad, Gigess, Alaa, and Fathi. You might remember that the first four had found the Lord, were taking the House of Blessing School of Ministry course when they were kidnapped by ISIS militants. About two years later they had managed to escape from the cave they had been held in and were found by the last four men above, who then also became believers.

Together, 33 men traveled with Pastor Farid from Fallujah to Mosul. They had arranged to use the mosque on this past Friday, February 1, 2019. Friday was purposely picked because that is the Muslim day of prayer and the mosque would likely be filled to capacity. As expected, there were about 500 men gathered when Farid got up to speak.

When Farid stood up, he introduced himself and proceeded to tell the crowd that he was going to share with them the story of a great miracle he had experienced recently. He also made sure to tell them that it was not just a false god that sent him, but rather, the GOD of gods. He then began telling them how he, a blind sheikh at the time, had been speaking to a crowd of men and telling them about Jesus Christ, the true Messiah, when some men beat him to the point of death and threw him into the city garbage dump. He then began to tell them about God’s angel that had come and touched him. Somewhere during his testimony, a group of ten angry men got up, picked their shoes up from the floor, and went up front with the intent of beating Farid and running him out of the mosque! As they got up in front of the crowd, and with the 33 men praying for Farid and the developing situation, God froze all ten men’s hands to where they couldn’t move them. The pain became so intense that they fell to the floor right in between the crowd and Farid! As this happened, voices could be heard in the crowd, asking, “What is THIS??” The crowd was stunned!

As Pastor Farid was about to finish his story, two of the men from the crowd shouted out with loud voices saying that they knew Farid and his family and could verify that everything he had said was true. Farid then finished his story and told how the angel had healed him and told him that God would heal all seven of his children who had also been born blind. He just needed to go home and lay hands on them and pray for them. He also told the crowd how God had called him to preach and pray for the sick, just as people had done in the Bible. Farid went ahead and told them that this God he had been talking about was a God that they should all come to know. As he invited them, they all began coming down front in long lines to be prayed for. As they did, Farid went to the ten men who were still on the floor and incapacitated. He asked them if they also wanted to become disciples of Jesus and they most heartedly agreed! It took about four or five hours, but all 500 men present prayed the sinner’s prayer on February 1, 2019!

The men in the story above are now about the business of sharing the same good news of the Saviour who died on the cross at Calvary and rose again with their families. You and I have been blessed in getting to hear their story and now we have the privilege of praying for these men and their families. All of them have now decided on a very difficult road, not only for themselves, but for their families as well!

One thing that the House of Blessing missionaries are telling anyone and everyone is the fact that this same Messiah is returning very soon. Watching for the return of the Messiah is part of their message, every single day.

For people living under the conditions they are living under, such as it is in the volatile Middle East; knowing what the Bible has to say about the signs of the end of the age, the message of Jesus’ soon return is a glorious and hopeful message! I have to wonder if we in the West have the same excitement about our soon returning KING?? Could it be that we really do desire Heaven and even for Jesus to return, but would not be too disappointed if He waited a little longer? Could it be that we are so satisfied with the baubles and trinkets of this life that our vision of the glory of our true destiny has become dull and tarnished? Something to think on, but not too long! Our KING is approaching the door…!

There is one more story to tell of a great miracle; a story that also just happened within the last few days. Watch for it tomorrow!

Please continue to keep Pastor R in prayer. He is doing fairly well and is receiving many to his tent for prayer. Pray that he can stay healthy. Please also continue to pray that the House of Blessing is able to continue having the means to reach out to these who have been put in their path. Thank you.