This will once again be a rather short update but I received a call from Pastor R and he asked me to let you know the latest, now that the Muslim month of Ramadan has begun. Just before doing so, I would like to share a passage of Scripture found in the Book of Acts:

22 “…we want to hear what you believe, for the only thing we know about these Christians is that they are denounced everywhere!” 23 So a time was set and on that day large numbers came to his house. He told them about the Kingdom of God and taught them about Jesus from the Scriptures—from the five books of Moses and the books of prophecy. He began lecturing in the morning and went on into the evening! 24 Some believed, and some didn’t. Acts 28:22-24, (Living Bible)

Those of us who have grown up in the West, for the most part, have enjoyed freedom in how we choose to worship. This is not, nor has it been so, for much of the Christians in the world. This is the case in most Muslim nations. In nations that are predominantly Muslim, Christians do not enjoy freedom of worship and not only are they spoken of badly and considered infidels, but they are persecuted. A great many have been martyred due to their faith in Jesus Christ. This is the story of the House of Blessing in the Middle East, yet the truth about Jesus Christ continues to be preached and taught by the HOB missionaries.

{Note: I have inserted into this update some current photos I just received. They show one of the latest Muslim Imams (same as ‘head-sheikh’) being baptized after he had received Jesus Christ as his Savior and Lord. The photos also show one of the large refugee camps, along with a few of the children. There is also a photo of some of the HOB teachers sharing the Good News of the Gospel.]

For those that have followed the story of the House of Blessing, you know that a special effort is put into evangelism during the Islamic month of Ramadan (a month of prayer, fasting, and yearly sacrifice at the end of the month for all Muslims). Year after year, Jesus the Messiah, has made Himself known to a great many Muslims, by visions or in dreams, even as they were praying to the false god, Allah. Most of these folks have never known anything different. Countless times, after hearing the Good News of the Gospel, Muslim people have said, “We have been misinformed! We have never heard the message of God’s free gift of forgiveness in this way. We have never known the true story of Jesus’ crucifixion and resurrection! We have never understood who Jesus really is! We need to meet your Messiah!!” 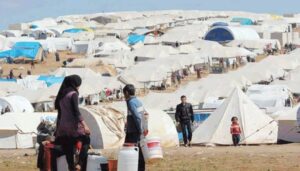 The greatest miracle possible happens once a person’s eyes have been opened to the real story of God’s love for mankind, demonstrated through Jesus’ sacrifice on the cross as the Lamb of God. It is the most natural thing for these folks to then want a walking, talking relationship with the Living God that has such a love for them!

And…this is exactly what is already happening, even this early into Ramadan. 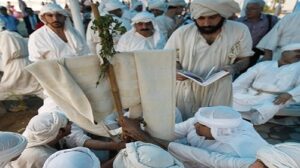 Pastor R tells me that the House of Blessing is using a strategy this year, a bit different from previous years. Although there are still going to be large gatherings of people to hear the word preached and taught, most sharing of the Gospel this year is from tent to tent.

Two or three HOB missionaries will go to a tent and if allowed, will share the Good News of the Gospel with them for one hour. They will bring a refreshing drink of tea with an Oregano mixture in it that has proven to be quite effective in treating those sick with the flu or the Covid-19 virus. After the hour of sharing the gospel, most are very responsive to the message and ask help in praying the sinner’s prayer. The missionaries also pray for those who are sick. Then they go do the same thing again with those in another tent. This goes on and on, most hours of each 24 hour day. Each missionary team has a goal of reaching the people in at least 100 tents each. 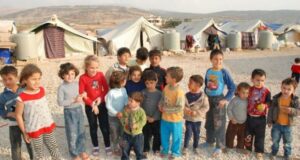 Although HOB so far only has 500 Bibles of the 2,000 they need, they are distributing at least one Bible to each group of new believers which they will then share. The teaching materials used by the missionaries are packed with Scriptures, with all passages printed out word for word. This way, even with not enough Bibles available, the Word of God is still being accurately shared as it applies to each lesson being taught. Because Resurrection Weekend is right in the middle of the month of Ramadan, the people are hearing much about the significance of the death and resurrection of Jesus, coupled with teaching of Jesus Christ’s soon in-person return as God-King to set up His Kingdom to rule over the entire world.

Even though the main emphasis of the HOB missionaries is evangelism, they do what they can in helping to distribute food as they have it, as well as continuing to help the people reset and rebuild their tents. The love of God is shared in whatever way they can, including helping the refugees to bury their dead. 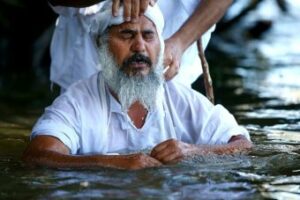 Communion services of course continue wherever it is possible to do so. Pastor R continues to have meetings with his leadership for prayer and planning how to go about the tasks at hand. Pastor R still struggles with a fever and other pains but God continues to keep him functioning. Let’s continue to hold him and the entire House of Blessing community of believers across the Middle East up in prayer. God continues to answer prayer and an abundant harvest of souls is being brought in!

Thank you all for your prayers and support. What if this is the last Ramadan before God calls His people HOME…?

1 thought on “MIDEAST UPDATE….4/5/2022….Multitudes of Gentiles Being Brought into God’s Kingdom!”