It is amazing how quickly changes are happening all across the globe today. The epicenter of the entire earth however will continue to be in the Middle East until our Lord, the KING of Kings, comes to take control for His promised 1,000 year millennial reign. The fallen Lucifer knows the Bible and is well aware that the Jewish people have a special place in God’s heart. He also knows that the fallen human race has been offered the grace of forgiveness as well as an intimate personal relationship with the Father that even the angels are mystified by. Lucifer, on the other hand, is jealous of this forgiveness and relational honor offered to mankind, and intends to destroy as much of the human race as he can. God, however, has a plan that was set into motion long before the foundation of the earth was laid that the fallen one, nor any of his cohorts, can overturn.

It was God who chose to use man to preach the Gospel to other men for the salvation of souls. To many it is foolishness, but to others who recognize the love of God for what it is, it is not only life, but life eternal. Paul the Apostle, by the inspiration of the Holy Spirit, put it this way:

The population of Syria in 2010 was about 21.5 million. I read a report a few days ago saying that the true death toll in Syria since 2011 is now over 600,000. This is nearing the number of men killed in the American civil war late in the 18th century, but the population of the U.S. in 1860 was about 31.5 million. What has happened, and continues to happen in Syria is almost incomprehensible. Unfortunately, the situation continues to get worse. 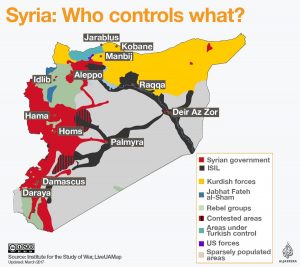 In spite of this, the House of Blessing missionaries continue to preach the gospel of Jesus Christ and the cross. This week is being celebrated in many nations around the world as Easter Weekend. What has been distorted in Western culture by pagan influence to the Easter bunny and the egg hunts that are arranged for the children, is really a much different story. The “story of the passion” is the greatest story ever told because it is the story of the love of Almighty God for humanity. It is a love so great that it is impossible for man to fully comprehend. In a world where some religions teach their followers to torture and kill those who believe differently than themselves, we have the story of God expressing His love by taking on the form of a man and allowing Himself to be put on a wooden cross and crucified as the ultimate sacrifice…the only sacrifice that was sufficient to bridge the gap between a holy God and fallen man. All religions teach of some type of paradise after death, but real paradise can only be made available to mankind by one means…the way of the cross of Jesus Christ. There is no other way.

Presenting the way of Jesus Christ as the one and only way is not popular in our world today. There is a powerful move today to join all religions under one head. Pope Francis, the current Pope of Rome, is continuing to draw all religions on the planet together under the “Mother Church”, the Roman Catholic Church. In order to do this, there must be a considerable amount of compromise of religious beliefs so that all can come to some agreement. This movement was not instituted by God, but rather the fallen one, himself. This same source that is bringing all religion under one head is also attempting to draw all sovereign nations together under one head, as well as all world economies into a one world economic system. Mankind in his fallen and flawed wisdom, fails to see that this cannot be successfully accomplished except through the means of the rulership of the one and only All Powerful, All Knowing, and Ever Present God of the Universe. 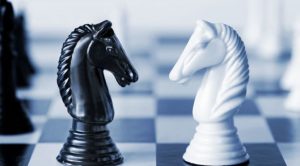 Today, as I write this Mideast Update, there is a mighty battle being waged between the evil fallen one and our  God, the Creator of all things. The outcome of this battle, however, in contradiction to the belief of many, is not in question. God has been in control from the very beginning, He is in control today, and He is in absolute control of the future. This means we who are truly submitted followers of the only real Messiah, Yeshua / Jesus, have no reason to fear the immediate future, or our soon coming eternal future! What a wonderful hope we have…a hope that is encompassed by a 100% total assurance of God’s absolute control and direction of our individual lives. He will guide us right through every event that unfolds between now and when we hear that mighty shout and Trumpet call of God, when we are snatched into the Presence of the LORD and KING, our eternal Friend, Yeshua / Jesus, GOD Himself! Here is how the Apostle Paul described this event:

But I do not want you to be ignorant, brethren, concerning those who have fallen asleep, lest you sorrow as others who have no hope. For if we believe that Jesus died and rose again, even so God will bring with him those who sleep in Jesus. For this we say to you by the word of the Lord, that we who are alive and remain until the coming of the Lord will by no means precede those who are asleep. For the Lord Himself will descend from heaven with a shout, with the voice of an archangel, and with the trumpet of God. And the dead in Christ will rise first. Then we who are alive and remain shall be caught up together with them in the clouds to meet the Lord in the air. And thus we shall always be with the Lord. Therefore comfort one another with these words. 1 Thessalonians 4:13-18

I really love this passage of Scripture because, for those of us who love the Lord, we are given such assurance! GOD does not lie! He takes notice of every little sparrow that falls out of the sky, and He watches me…and He watches you! 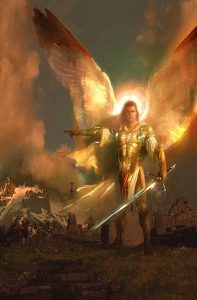 The Widow Sisterhood know very well that the Lord watches over them. They have been shot at–even hit– trapped in cross-fires, caught in situations that only the Lord could get them out of, and they continue on. In these last few days, these widows, led by Mufidah and Fatwa, have ministered to 28 seriously injured people, seeing them through their healing process and leading them to a knowledge of our Lord and Saviour, Jesus Christ. These are in the northwestern parts of Syria.

In the northern areas of Syria, Hafezah and her helpers have served communion to about 950 of the believers as they moved around the area. Many of these believers see this as one of the most important–if not the most important part of their week, as they gather to worship the Lord with the partaking of the emblems representing the Body and Blood of the Lord. In northern Syria, even though another ten missionaries were martyred, at least an additional 180 souls were reached.

In the suburbs of troubled Damascus, God has not been stopped in what He has been doing through His servants, Omar and Same. These men and those helping them, are continuing with their teaching of the new brethren in the three mosques that have been turned into Christian churches. Lesson after lesson is being taught, with the Bible students taking the teaching materials home in order to complete their homework. Scripture after Scripture is memorized so that they can be recalled as needed.

Sarah also continues under the blessing of the Lord as about 140 were gathered to receive her encouraging word from the Father above. There continue to be many who benefit greatly from the very special message that the Holy Spirit helps her deliver.

In Iraq, the work continues as well. Even though there is great emphasis on the carnage and disaster in Syria, the HOB missionaries in Iraq are also experiencing harsh realities. The fighting between Islamic factions continues, and the battles between the Iraqi military and terrorist fighters continue. Lives are lost every single week, and just as in Syria, God’s people are doing everything possible to reach as many as they possibly can before these souls enter eternity. The true reality of it all seems to be lost on most of us in the West who are not living in these kind of circumstances. 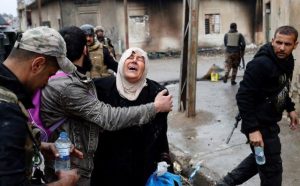 As another twenty believers were lost within the community of HOB believers, an additional 160 were reached with the Gospel of Jesus Christ and His saving power. Fatima and the brethren helping her served communion to 750 believers this last week. These believers got together to thank the Lord for His goodness. They worshipped Him, singing the new songs that the Holy Spirit gave them with which to worship.

The great city of Mosul is still not totally liberated. Many lives are lost every week, including many of the family of believers. Another 46 of these faithful Christians were lost this past week, but at the same time, at least 400 more souls were reached with the love of Christ.

As I have reminded us so often, please don’t let the statistics be just numbers. These are all individual believers–just like you and I. The circumstances could be reversed where you and I would be the statistics and they the ones receiving these updates. That could still happen, folks! Let’s continue in our faithfulness in intercessory prayer and support. These, our brethren, really depend on it.

Last, but not least: Please continue to pray for a miracle concerning the health of Pastor R. I have shared details about how grave his condition really is. He is facing major heart surgery and we already know the difficulties in Syria. Please join me in prayer for a great miracle–not just for his heart condition, but many other issues that are plaguing him at this time. The Lord has spared him life many times, and I know He can do what is needed for this brother now. God is good!

Continuing in His Service,