Five years ago when I began writing the Mideast Update (originally called Jerusalem Updates), I would never have believed that I would still have the privilege of writing these updates today.

Here we are, already one third of the way through the year 2017. Quite often I find myself looking back, remembering so many stories of the miracles, the sovereign interventions from heaven, the multitudes of souls reached, oftentimes just moments before death, and, of course, those that were lost. So many HOB missionaries have given their lives for the sake of the Gospel of Christ, and even more of the newly converted Christian community have also lost their lives. The Bible tells us that the deaths of God’s saints are precious in His sight, and we know each one of these followers of Jesus Christ are in His presence today. But one cannot help but think of all those who have died without Christ. Every effort, however, is being made to reach them in time. One of the most productive times for evangelism for the House of Blessing missionaries has proven to be during the Muslim month of Ramadan, and that time is again nearing. 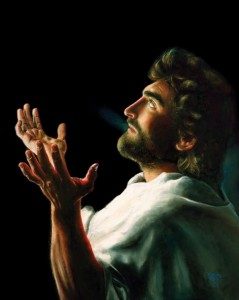 In the last few years, HOB has put a special emphasis on evangelism during Ramadan when Muslim people devote one month to fasting and prayer. Millions will also make pilgrimage to the Hajj. God knows who the people are that are truly looking for answers, and He has a way of interrupting their prayers to the demon god, Allah, and making Himself known to them. Many thousands all over the Islamic world have had visions and dreams in which Messiah Jesus has appeared to them. The testimonies are astounding! So, because this is such a rich time of harvest for the Kingdom of God, HOB makes preparations by placing ministry teams in strategic locations, as the Holy Spirit leads. These teams spend the month sharing the story of the real Messiah and the provision God made for man’s forgiveness and eternal life through Him, as God’s one time sacrifice for sin.

As faithful supporters of HOB and their ministry, please take this wonderful opportunity to the Lord in prayer, going boldly to the Throne of Grace as the Lord has taught us to do, and ask Him, the Lord of the harvest, to bring about a great harvest in this time when many Muslim people are more open to recognizing the One who paid for their spiritual and eternal freedom. As we watch world events, this might prove to be the most important time ever for Muslim people to be reached with the Gospel of Christ. The whole world is experiencing great threat of major wars, but no place on earth is more volatile than the Middle East.

As I spoke with Pastor R this week, he shared a great desire to be fully functioning physically and in a strategic location where he can advise and lead the hundreds of HOB missionaries as they prepare to fulfill what the Lord is asking of them at this crucial time. Pastor R has not had the bypass surgery that he needs, but is asking the Lord to intervene as He has so many other times and free him to do what he has been raised up to do in this hour. He feels it is a bad time to be recuperating from a major surgery when there is so much at stake.

As preparations are being made for this evangelistic effort, the daily work of reaching souls continues. The situation on the ground for HOB missionaries changes from one day to the next. One example of this was the massive explosion just outside of western Aleppo, Syria just days ago. As thousands of people were, by agreement with the Syrian government, gathered to be moved out of besieged towns via a convoy of buses, explosives were set off, killing at least 126, including at least 68 children. This number is sure to go up dramatically considering the grievous nature of wounds caused by such an explosion. Apparently, a van loaded with explosives was set off near the front of the convoy of about 70 buses, jam-packed with people. Pastor R said that a number of HOB missionaries in that area immediately responded to the incident. As so often happens, there are attacks on the first responders and twelve of the missionaries lost their lives while aiding the wounded. I am still trying to get more information on details.

HOB’s missionaries located in and around Aleppo were able to reach 270 folks this last week who wanted to put their lives and eternity into the hands of Jesus Christ, the true Messiah. Week after week, hundreds of people who have little to hope for, find that they can put all their hope in the one and true God, Yahweh, who is the creator of all things. Also, this last week, Hafezah and those ministering with her served communion to 850 believers gathered in different locations throughout the week. As mentioned so often, these are not just typical communion services as most in the West are accustomed to. These are true celebrations with song, prayer, worship, and ministry to one another through the mighty power of the Holy Spirit.

The miracles in and around Damascus are also continuing. Daily, Omar and Same (Sammy), continue to instruct the 2,000+ that are gathered within three former mosques, in the truths of the Bible, God’s Holy Word. These then take their studies home and share what they have learned with their families and close friends. A great miracle is unfolding right in the midst of chaos! The harvest is being brought in!

Sister Sarah also continues week after week. Her testimony of how God met her at the lowest time of her life and answered in such an unusual way is also turning hearts every time she speaks.

Fallujah is one of those locations that we don’t hear very much about in western news. The reports coming out of there tell of very difficult times. Adel and Haleb continue ministering along with the brethren, even while another 14 of their missionaries lost their lives for their testimony. Sister Fatima also continues with her communion services, no matter what the circumstances, just as Hafezah does in northern Syria. HOB’s missionaries were able to reach 80 who became believers and followers of Jesus. Their lives are now not their own, but belong to the One that created them! God is good! 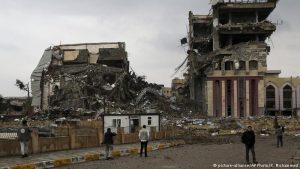 Mosul, where a large group of HOB missionaries have been ministering for a long time now, is still an embattled city. About 75% of the city has been retaken from ISIS militants, but the last 25% is proving to be the slowest and most brutal. ISIS militants have had two years to fortify and barricade themselves into position. They are very difficult to dislodge. The Iraqi army is having to deal with many small drones being sent remotely. The soldiers have their hands full, going from door to door rooting out militants. It has been reported that approximately ½ million of the population has left the city. Much of this city has been destroyed, as photos show.

In the midst of all this, Akram and Mustafa and the rest of the HOB missionaries and family of believers continue ministering the Gospel of Jesus Christ. HOB lost another 34 from both the ranks of their missionaries as well as the Christian community. However, at the same time this last week, another 300 were led into an acceptance of the Lord Jesus Christ as their Savior. Praise God!

Pastor R was pretty excited about the progress shown by the 56 widows that HOB has been ministering to these past weeks. They are doing quite well and not long from now, will be able to get back out among the rest of the Christian community. They will prove to be powerful testimonies to the goodness of Christ and the healing power of the Holy Spirit. 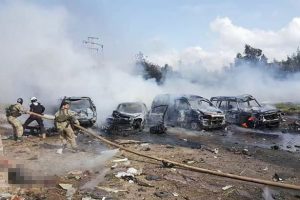 The Widow Sisterhood continues ministering to the injured, often in some of the worst conditions imaginable. The photo to the right is one of the most recent situations they went into. The Lord either heals the folks directly or their healing happens over a period of days. But, always, each one that is ministered to is led to the Lord as they pray the sinner’s prayer. Forty three separate people were reached in this way in the last few days. Praise God! The Bible tells us that each one has their name written in the Lamb’s Book of Life. I hope and pray that every person reading this update already has their name in this most important heavenly record book. If not, and you would like help making sure that you are in right standing with God, feel free to send an email to me at the contact information at the bottom of this update. I will be sure to get in contact with you. Time is short before it will be too late to make this most important decision.

In closing, let’s keep the end of May in our prayers. Ramadan this year starts on May 27. Finances are needed for resources and moving missionaries into position for this crucial time. Let’s pray that the harvest this year will be greater than ever before…not for the sake of statistics, but rather because souls headed into eternity without Christ are being rescued and turned 180 degrees in the opposite direction. The book of Jude puts it like this:

But you, dear friends, build yourselves up in your most holy faith and pray in the Holy Spirit. Keep yourselves in God’s love as you wait for the mercy of our Lord Jesus Christ to bring you to eternal life. Be merciful to those who doubt; snatch others from the fire and save them, to others show mercy, mixed with fear–hating even the clothing stained by corrupted flesh. Jude vs. 22-23

I want to thank all who so faithfully pray for and support this ministry in these last moments of the age. God bless you all. For those that would like to support this ministry, the quickest and easiest way at this particular time is through my PayPal account attached to my e-mail address. All funds are then wired to Jerusalem.