As I write this update, both the chaos of war as well as the supernatural intervention in the lives of people continues. The struggle for control of Syria’s largest city, Aleppo, continues with Syria’s dictator Assad sending the Syrian military in full force, indiscriminately killing militants and civilians alike. Hospitals, clinics, and even refugee camps have been hit, leaving many hundreds of dead on the ground. The battle for Aleppo involves much more than just the city of Aleppo, but also the surrounding cities and towns including Idlib. The four largest cities in Syria; Aleppo, Damascus, Homs, and Idlib have been decimated in the five year civil war Syria has been going through.

It is not the purpose of this update to go into detail concerning what has been happening in Syria in regards to the power struggles which involve Assad’s military, Russia’s military, Iran’s military, Lebanon’s Hezbollah army, and the many militant groups involved. It is my purpose, however, to provide updated information involving what is happening with the hundreds of House of Blessing missionaries scattered not only throughout Syria, but the rest of the Middle East.

These last few days have proven unusually tragic for House of Blessing, as they had quite a number of their missionaries killed. In northern Syria at least another 15 of Mufiedah’s Widow Sisterhood were killed. There were also 15 of HOB’s male missionaries killed, along with at least 50 of the newer believers and 12 of their children. All these people were located where bombs were dropped or where missiles landed. Added to these numbers were the hundreds of civilians killed. 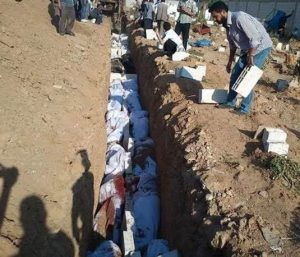 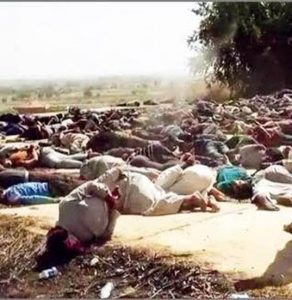 In the midst of all the carnage, however, there are about 400 of HOB’s missionaries working feverishly to try and save lives. At the same time, each victim hears about Jesus and literally hundreds are prayed with as they accept Jesus Christ as their Messiah and LORD. Many of these folks are reached within the last few minutes of their lives upon this earth.

Sister Mufiedah continues to work with very badly injured folks–people who have compound fractures, shrapnel injuries, etc. In the last few days she has treated and prayed with at least 35, and each one of the 35 have survived.

Hafezah also continues to serve communion to as many believers as will come. She served about 1,500 in the last few days. Many of these are healed and virtually all who ask for the baptism of the Holy Spirit are baptized and endued with power from on high!

HOB’s missionaries in Iraq also faced great losses. Eight of their missionaries were killed in Fallujah and another twelve in Mosul. There is great suffering in both of these cities and the surrounding areas. Many are dying of starvation and hundreds of innocents are being killed as well as many Iraqi soldiers. Much of this is because of ISIS. As bad as the starvation is however, Fatima continues serving communion as well. She had about 1,800 attend in the last few days, with the very same results as HOB is seeing in northern Syria. 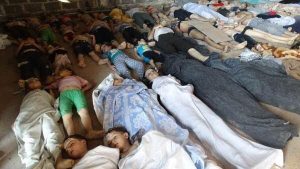 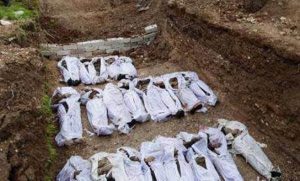 These people are all in desperate straits, needing everything…food, tents, medicine, etc. They really need our prayers and support. Every time supplies come in, the missionaries share them with the people around them. As they share what little they have, the doors always open wide to share the Gospel of Jesus with those they help. Many are reached in this way.

Pastor R is still located on the outskirts of Damascus. Although the Lord healed him of the mustard gas spots and blisters, he is again fighting with headaches, eye troubles, and weakness. He has not been able to sleep for several days now. In spite of this, he has a steady stream of people coming to his tent for prayer. He prays for about 500 people a day. It is exhausting, but as long as the doors stay open to pray with people, he refuses to turn them away.

I would like to include a Scripture here that I have mentioned before. It really fits the situation well. It is found in Romans 8:

What then shall we say to these things? If God is for us, who can be against us? He who did not spare His own Son, but delivered him up for us all, how shall He not with him also freely give us all things?…Who shall separate us from the love of Christ? Shall tribulation, or distress, or persecution, or famine, or nakedness, or peril, or sword? As it is written: “For Your sake we are killed all day long; we are accounted as sheep for the slaughter.” Yet in all these things we are more than conquerors through Him who loved us. For I am persuaded that neither death nor life, nor angels nor principalities nor powers, nor things present nor things to come, nor height nor depth, nor any other created thing, shall be able to separate us from the love of God which is in Christ Jesus our Lord. (verses 31, 32, 35-39)

Most of those reading this blog are likely living in relative safety today. This is something we need to thank our Lord for daily because we know things are swiftly changing. Any of us could wake up tomorrow morning and find everything in our personal world changed overnight. But, while it is still easier on most of us, we cannot forget to pray for those who are on the front lines. So many are trying to survive under the very worst of circumstances. As the Lord lays it on our hearts, we also need to help them. Someday, it might become our turn!

Thank you all for your prayers and support! May the Lord bless you all.