(caution, some photos below are pretty graphic)

In the fourth chapter of John we find a passage of Scripture that I would like to use as an introduction to today’s Mideast Update. It begins in verse 31:

…His disciples urged Him, saying, “Rabbi, eat.” But He said to them, “I have food to eat of which you do not know.” Therefore the disciples said to one another, “Has anyone brought Him anything to eat?” Jesus said to them, “My food is to do the will of Him who sent Me, and to finish His work. Do you not say, ‘There are still four months and then comes the harvest’? Behold, I say to you, lift up your eyes and look at the fields, for they are already white for harvest!” (verses 31-35)

All across the world, the true Church of Jesus Christ is feeling an urgency that I believe is from the Holy Spirit. The Spirit of God is telling us, “Time is short…Very short!” Although God has not called any of us to save the entire world on our own, we have been called to complete the course He has laid out for each of us individually. For some, it means touching the lives of thousands, but for most of us, the numbers may not seem all that impressive–at least in the eyes of the world around us. It is however not the “numbers” that impress God, but rather our faithfulness and obedience to the leading of His Spirit.

With these things in mind, I would like to share the latest information I have received from Pastor R, who is located somewhere not too far from Damascus, beginning with an answer to prayer! Due to finances that have come in, another full truckload of wheat has been purchased, delivered, and distributed by faithful HOB missionaries in Syria. A 40-ton truckload of wheat (or flour) turns into about 70 tons once water and some cooking oil has been added. Pastor R told me that this provides something to eat for well over 50,000 people. What always happens with a blessing as this, is that the door opens wide to share the love of Jesus with many thousands of souls! A true outpouring of love on these refugees goes a long way! Not only is a bit of sustenance shared with them, but also a testimony of the love of God–which none of them had ever heard, much less experienced! 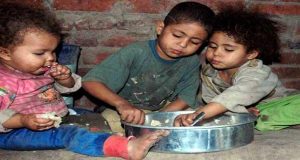 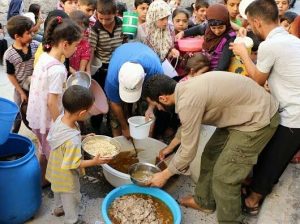 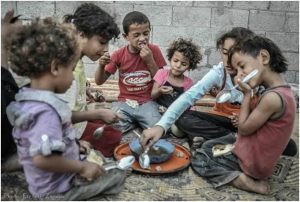 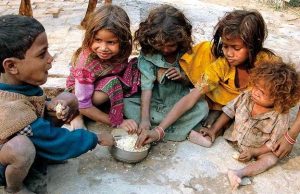 In northern Syria, Hafezah and Ferial continue offering communion to any who will gather. These women and those who assist them make sure that it is only true believers who participate in this very special observance. As it has been for months now, there are hundreds that come every single day that it is available. In the last few days, the crowds have not been as large as before due to the desperate conditions, but still 700-900 per day have gathered! As usual, many are healed of ailments or injuries, and nearly all are baptized with the Holy Spirit and His power.

Sister Mufiedah and the other missionaries also continue sharing the love of Jesus for about 18 hours each day by visiting one family after another, from tent to tent. The response to the love of God continues to be tremendous. It is very difficult for most of us to get a good picture of what really goes on because it is nothing like what we might imagine. This is being done while fighter jets are dropping bombs and shooting missiles, often right into the areas where they are ministering. They never know when an artillery shell or something much worse might land at their location and their task on this earth is over. Take a minute to imagine that. Of course, every time I look at the photos, it’s all of the children involved in this horror that hurts the most and is beyond disturbing. …Even so come, Lord Jesus! 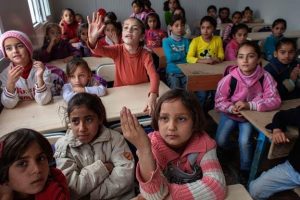 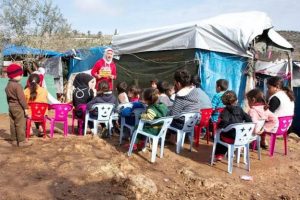 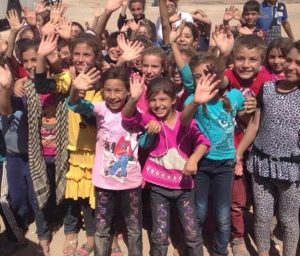 I learned that another 17 women, 10 elderly folks, and at least 18 children were killed because they happened to be in locations that were attacked. These numbers are all of believers that were killed. Hundreds of unbelievers were also killed in these attacks. This is why the missionaries are working 18 hours a day. They know that souls are at stake everywhere, and our world is facing the end of the age.

The reports from Iraq were also tragic. Fallujah and the surrounding area is still facing a drastic food shortage and people are starving to death every day. Of the many who have literally starved to death, there were at least six of the HOB missionaries. Many cities in Iraq are facing drastic circumstances, and hundreds of people are losing their lives every week Iraq. Just in Mosul, hundreds of people lost their lives this last week including 14 HOB missionaries and at least another 20 of the new believers. We must keep these folks in our prayers!

As in northern Syria, times of sharing communion continue to be offered as often as possible. Sister Fatima said that between 1,200 and 1,300 people flow through her home every day. The HOB missionaries are finding that people are drawn to these communion services because of the joy and refreshing that they can receive there. There is a great anointing present whenever the believers get together to celebrate communion. It is not done as a ritual but rather a time of intimacy with God. Each person present is specially touched by the Lord during these times and supernaturally strengthened and prepared for whatever the next day may bring.

Hearing the stories of these special times of communion which are now happening all over the Middle East strengthens my own desire to ensure that my own home is always a place of peace, joy, love, and refreshing for anyone visiting. I pray that this is a desire that all of us as followers of Jesus Christ have and will make sure that we spend quality intimate time with our Lord and Master every single day so that our homes become locations of spiritual refreshing.

Pastor R continues praying for at least 500 people each and every day. The HOB missionaries that are constantly moving him in order to try to keep him safe have been moving him closer and closer to a location that has an enormous number of refugees. I don’t know if this is one really large refugee camp, or if it is a group of camps that run together. What matters is that, with hundreds of thousands of refugees, the opportunity to touch lives is always there. For anyone that has experienced praying for people hours on end, you know how exhausting this can be. What continues to be a serious problem, is the continued bombing…sometimes with Mustard Gas spreading over areas where people are trying to survive. Pastor R is again struggling to breathe. While speaking to him Sunday evening, a group of us prayed for him, and he received some relief. But, it is a recurring problem. In spite of continued talks of a ceasefire, the carnage continues all over the Mideast. Our brother needs prayer; the missionaries and believers need prayer, and we need to be faithful to lift them in prayer every time the Spirit of God puts it on our hearts. Our prayers have a direct effect on people’s eternity. Nothing can be more important! 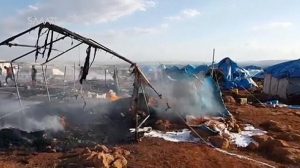 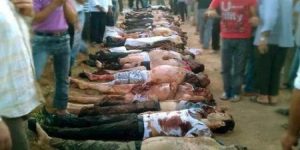 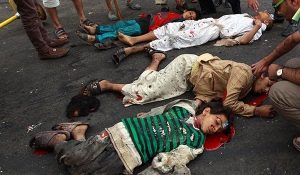 As we get closer and closer to the Islamic month of Ramadan, the need for Bibles once again becomes critical. Let’s pray that God supernaturally feeds people…even with manna if need be, so that money can be used to purchase Bibles for the hundreds of HOB missionaries and the thousands of brand new believers that have never had a Bible of their own. It would be so good if every one of these believers had a copy of the Scriptures of their own to use as they share the good news of God’s love with the lost. God had a special way of intervening in the lives of true seekers each year at Ramadan…even if they are praying to the wrong god! What if this is the last Ramadan before WW3 breaks out? This could very well be the case. We must work while it is day, as Jesus said, because night is coming when no man will be able to work! If there has ever been a time for God’s people to check their priorities, it is today! We’re running out of time! I want to share a couple of my favorite Scriptures out of the Book of Isaiah here:

Oh, that You would rend the heavens! That You would come down! That the mountains might shake at your presence—as fire burns brushwood, as fire causes water to boil—to make Your name known to your adversaries, that the nations may tremble at your presence! When You did awesome things for which we did not look, You came down, The mountains shook at Your presence. For since the beginning of the world, Men have not heard nor perceived by the ear, nor has the eye seen any God besides You, Who acts for the one who waits for Him. You meet him who rejoices and does righteousness, who remembers You in your ways. (Isaiah 64:1-5)

Arise, shine; for your light has come! And the glory of the LORD is risen upon you. for behold, the darkness shall cover the earth and deep darkness the people; But the LORD will arise over you. And His glory will be seen upon you. (Isaiah 60:1-2)

The day of great shaking is now at hand! So is the time for the true Body of Christ to shine like never before! We are looking down the barrel of the End of the Age and the LORD of the harvest is moving mightily all over the earth through His people! Will you also hear His call to be a part? The day will soon be past; night comes when no man can work! I want to hear the words: Well done, good and faithful servant; welcome into the joy of your LORD! How about you?

I again want to thank all of you have prayed so faithfully. There are also those who have helped with the financial burden of ministering to such a huge multitude of people. God continues to answer prayer, and He also continues to multiply what comes in! God is good!