As the conclusion of the Muslim month of Ramadan is just days away, we praise the Lord of the Harvest. Many souls have been reached once again that have become part of the Kingdom of God. At the same time, we see the temperature rising in the relationships between the nations of the Mideast. The escalation of tensions are clear signs of major conflict being inevitable, and Israel finds herself in the cross-hairs. Toward the end of this update, we’ll take a brief look at the latest developments.

While the House of Blessing missionaries are not blind to all that is going on, they do their best to stay focused on what is directly before them. Wherever the HOB missionaries go, they share the Good News of the soon returning Messiah, crowds have continued to gather. The photos included in this update are just a few examples of what God has been doing in response to your prayers and your financial support.

War has been an issue since the very beginning of HOB’s latest project which began in late March, 2012, by Pastor R taking the first load of Bibles over the border into Jordan. The so-called Arab Spring actually began in early 2011 and has never officially ended. Although some areas are seeing a bit of temporary calm, there is widespread sickness, disease, starvation, general turmoil, and of course, rumors and threats of a much greater conflict brewing than the Mideast has seen even in the past seventy years. Lives continue to be lost due to political and religious conflicts, and there is little hope of anything really bringing the Middle East back into some semblance of “normal.” Many have commented that it seems something extraordinarily malevolent has been unleashed in our world in the last decade. I believe the evil we are now seeing has only just begun to show its true nature. It is one of the signs that we are at the end of the age. I am aware that some will scoff at the thought that we are at such a time today, but whether we choose to scoff or ignore the abundance of warnings provided for us in the Bible, the time is here and we would be wise to recognize it for what it is.

The House of Blessing missionaries recognize the signs of the times and are making the most of what little time is left as they can. Pastor R and I have had many conversations about the signs in the Middle East confirming the imminent return of the Messiah. In light of what is clearly ahead, he has mentioned to me more than once that even though war is horrible and there isn’t a Christian missionary that wants to see it come, they know it is inevitable. They also know that war provides an extraordinary opening to share the Word of God. Muslim people don’t know of the assurance that is available in knowing their sins can be eternally forgiven and that eternal life in the Kingdom of God is assured for those who accept His free gift provided through Jesus’ sacrifice on the cross. This is a hope they do not have but they most happily respond to when they are given the Good News. One can see the eagerness to hear God’s Truth in the photos included which were taken in the past few days. 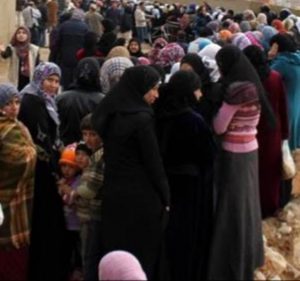 Finding a way to share food with the starving also helps open doors for sharing the love of God. Starvation among the refugees is common but one of the more critical areas today is in Iran. HOB has a thriving work in western Iran but the conditions are harsh. Some of this is due to the economic squeeze on the nation of Iran at this time, but regardless of politics, it is the civilians that are always hurt the most. Though conditions are very difficult, the work of evangelism continues and another fifty families have been reached with the Gospel. These people have now joined the rest of the underground community of the House of Blessing believers.

In the Deir Ezzor region of eastern Syria, the teaching and training of well over 200 former ISIS militants continues in full force. The days are long with classes of intense Bible study, times of prayer, and of course times of worship and refreshing in the presence of the Lord. As these men are trained, the mothers and children are also being helped into a good understanding of the Bible and the ways of God. The miraculous stories of these former militants and their families being found by the love of God is something that still amazes me. Praise God!

The miracle of Pastor Farid’s encounter with one of God’s angels when he was left for dead in the city garbage heap, and his commissioning into a ministry God has called him into, also powerfully continues today. People still come by the hundreds to hear him preach and pray for the sick. Hundreds are healed every week and most importantly, hundreds more find Jesus Christ as their Savior and Lord. God is good! 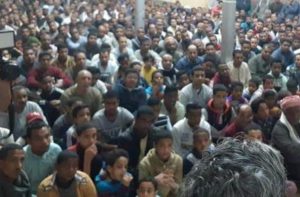 Testimonies continue of believers by the hundreds gathering to celebrate communion in special services arranged by sisters Hafezeh, Ferial, Fatima, Mariam, and others as they are able to do so. These services continue to be the favorite times of refreshing for all the believers in very difficult times.

HOB Bible classes are also continuing across the Mideast wherever it is possible. The circumstances often make it very difficult. HOB has been blessed to have been able to reach many Muslim leaders with the Gospel over the past few years. They are now busy bringing lost souls into the Kingdom of God by introducing them to the real Messiah, Jesus Christ. Knowing how short time is, they are making the most of every opportunity that presents itself. 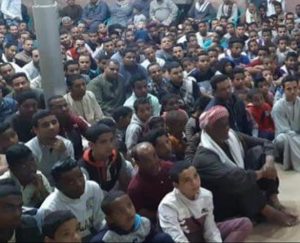 As always, we receive good news and then there are the trials of being in a war zone. Although there is not a whole lot of mainstream news coverage of the fact, there are some  developments in northern Syria that do not bode well for the immediate future. Conflicts have not ended. The House of Blessing has however decided long ago that the Lord has them in place in this mission field no matter what comes. This means that they are often the first responders when people are injured or killed. Just in one area alone these past few days, HOB missionaries treated dozens of injured people. As is always the case, each person treated is told the Good News of Jesus Christ, the soon coming Messiah.

I mentioned above that there is greater conflict brewing. It seems that every year around this time, the threats of war escalate. Some of that probably has some to do with the Muslim month of Ramadan and Al Quds Day, but, this year the threats seem particularly volatile.

Al Quds Day is used every year as a means to incite against the Jews. The day was originally created as an annual event by Iran’s first Supreme Leader, Ayatollah Ali Khomenei. It comes on the last Friday of Ramadan each year. Mass rallies are held all over the world to demonstrate against the so-called “occupation” of Palestine by Jews. Iran’s present president, Hassan Rouhani calls the State of Israel illegitimate and Israel “an old wound.” While the regime in Iran called all Muslims from around the world to hold massive rallies to mark Al Quds Day, the threats from around Israel continue.

Islamic jihad leader Ziad al-Nakhala threatened Israel in an interview with the Hezbollah-affiliated Al-Manar TV. “We are not far from a clear equation: if Israel bombs Gaza, we will bomb Tel Aviv”, said Nakhala. He went on to say that “Gaza terrorists can fire 1,000 frockets a day at all of the cities in Israel, thereby reversing the balance of power…”

Hamas’ leader in Gaza also threatened Israel Thursday during a speech marking Al Quds Day by saying,”…if war breaks out, we will hit Tel Aviv with twice as many missiles than in 2014.”

From Israel’s south, Saudi King Salman also spoke on Thursday and he said the Palestinian cause would remain the Arab world’s top priority. At an emergency meeting held in Mecca, the Saudi king again called for the establishment of “an independent state with east Jerusalem as its capital. In  his comments Thursday, he also took the opportunity to speak against Iran and its agenda by calling on Gulf States to confront Iran’s criminal actions. This coming after it has again been confirmed that it was Iran who was responsible for the attack on–not four–but seven oil tankers recently. It has also been confirmed that the Yemini Houthis, who take direct orders and funding from Iran, using drones, attacked two Saudi oil pumping stations. This caused the Saudis to have to temporarily shut down one of their main pipelines.

Iran and Saudi Arabia are rivals in their region, backing opposing sides in the Syrian and Yemeni wars. The Iranian regime supports President Bashar al-Assad and the Saudis are aligned with the rebel forces trying to remove him from power.

While all this is going on, according to reliable intelligence reports, for the last ten days or so, a Russian Air Force heavy airlift has been in process, non-stop, from Chkalovsky Air base and Mozdok Air Base into the Hmeimim and Hamah Syrian Air Bases. The aircraft being used are well known strategic heavy lifters. As these aircraft cross southwards over the eastern Black Sea they are entering and flying directly over Turkey proper before entering Syrian airspace. This is happening at the same time as Iranian and Syrian heavy lift aircraft are flying daily to and from Tehran to Damascus and Tiyas Air Bases. This tells us that something very big is brewing in northwestern Syria.

In conclusion, no one has yet heard from brother Omar, or sisters Mufiedah and Sarah. Please keep them in prayer. We pray that the Lord will strengthen them with the power of the Holy Spirit needed for their circumstances. What the devil intends for evil, God turns into good. Please pray as well for all of the members of the House of Blessing. They very much depend on your prayers. And of course, financial support is always much appreciated. The needs are always great. Thank you from the entire House of Blessing for your generosity!

The Messiah is coming, and He’s coming SOON! Let’s all finish well. For those that would like to help HOB financially, please find the convenient PayPal button on this website homepage. All funds coming in go to the House of Blessing.