In our last update, I mentioned that a large number of the House of Blessing missionaries in Syria went into the Daraa area due to the unfolding human tragedy resulting from the Assad regime retaking control of the area from the rebel forces who have been entrenched there for several years. There are widespread reports of indiscriminate bombings with innocent civilians being killed along with the rebel forces. This has also brought about the displacement of well over 200,000 civilians who moved toward the borders of both Jordan and then Israel.

As was pointed out in the last update, Jordan is already overrun with refugees, with an estimated 1.3 million, which includes those registered and those not registered with the government. Jordan is not allowing in anymore refugees but is sending some aid across the border to try and help with the desperate needs of the people.

Israel also is not allowing the refugees to cross into Israeli territory. The Israeli government’s reasons have to do with security concerns. It is impossible to stop terrorists from embedding themselves within the masses and crossing into Israel solely for nefarious purposes. 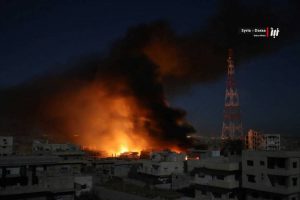 The last report I received from Syria confirmed that there are at least 100 sorties a day being flown into the Daraa region. There are scores of dead, many of these children. Once again, HOB missionaries help with burials of the dead. Although they had no access to a tractor and had to dig each grave by hand, they did manage to bury 80 of the dead. Sadly, many members of the House of Blessing community of believers were included among the dead.

While some of HOB’s missionaries buried the dead, others continued the work of sharing the Gospel of Jesus the Messiah. Omar, Same, and Radwn along with the help of 240 HOB missionaries, were able to distribute a truckload of sacked wheat which Pastor R was able to arrange for with donations. As they distributed the wheat, they were able to gather large numbers of people and share with them about the love of God as demonstrated through the death and resurrection of Jesus, the Messiah. Reports coming in told of at least 2,200 that came to a belief in Jesus and prayed the sinner’s prayer!

Sister Sarah also was able to gather large crowds of refugees. One of these gatherings was reported to be at least 1,100 in number. I do not have a report of how many became believers through the teaching of Sarah and the evangelism of the 85 women who work with her, but, in light of the usual results, I am sure there were hundreds who turned to Christ.

The Widow Sisterhood was also well represented in the Daraa region. These women, as we well know, concentrate their efforts to helping the injured. The injuries vary greatly, some being relatively minor, but others very critical and life-threatening. Most of the injured do not have any opportunity to receive professional help. This is when these women step in and are guided by the Holy Spirit in how to treat the wounded. Their main goal of course is to lead these folks to the Messiah, and they have had excellent success at this. Last week Sisters Mufiedah, Fatwa, and the widows treated and ministered healing to another 119 people. Every single one of these folks prayed the sinner’s prayer and became followers of Jesus Christ, the true Messiah.

The House of Blessing was able to get communion supplies to some of the brethren although the only report I received was from Sisters Hafezah and Ferial. Just these two faithful women and those helping them, were able to share communion with over 1,200 believers this past week. We know that there are gatherings of all sizes all across the Mideast who celebrate communion together as they are able. Pastor R confirmed with me again that these special celebrations last for many hours. The people are able to share a meal together and then celebrate communion, as our Lord instructed in His Word. It is made clear that these times of communion are for the body of believers only. God meets with these people and many are healed as they praise, worship, and sing new songs in the Spirit. How great it would be to visit one of these special services!

In Fallujah, Iraq, the eight former head sheikhs, Mefliah, Radi, Taher, Shaher, Ziad, Gigess, Alaa, and Fathi, along with the several thousand men (and now their families) from their former mosques continue receiving Bible teachings from House of Blessing teachers, Yosof, Zakaria, Abed, and Faisal. They meet at least twice weekly for their continued teaching and training.

Sister Fatima and the women assigned to help teach and train the 44 widows whose husbands were killed in the attack in Mosul are still poised to continue their training of these women and the 88 children who belong to them. Lack of funds have been an issue however and so the training is only being done one day per week. We pray that they will be able to continue soon. These women are very anxious to take the places of their fallen husbands. 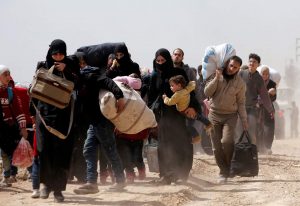 This report, as usual, only covers the very basics of what is going on in this missionfield. Pages could be written about each individual area. But this is enough of a summary to let the reader know that the work of the missionaries is alive and well. God is blessing with many souls as the work continues. The situation in Daraa is very serious, just as it was not so long ago in Eastern Ghouta. Most of the refugees who travel towards the borders don’t have tents or anything else. The UN is not meeting the needs of the masses of people. HOB steps in as best they can, and it always nets souls into the Kingdom of God. Although it is impossible for HOB to meet such huge needs, they work with what they have and ask God to multiply it…and, He does. In the midst of all the chaos and tragedy of war, God’s Spirit is being poured out in great measure and the harvest of souls is being brought in by the thousands every week.

The financial needs continue to be very great. The harvest is enormous and the outside help is not near enough to meet such great needs. We however serve a very big God! For those that have a heart for missions, the Mideast is one place where the harvest is coming as fast as the missionaries can bring it in. Whereas, in the West, it seems to take a thousand to reach one soul, one lone missionary is able to reach a thousand souls in the Middle East. This harvest must be brought in while it is ripe. The results are eternal. 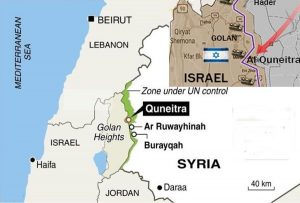 As we watch things unfold in Syria, it is easy to see how Israel is being hemmed in more and more. Iran continues to threaten to obliterate the Jewish State, and Israel continues to dismantle their efforts at setting up military establishments within Syria. The Syrian regime, now that it has nearly retaken control of the Baraa region, is eyeing the town of Quinitra, which is only a couple miles from the Golan Heights border. As the pressure continues to build in the north, the problems with Gaza continue to worsen. Israel is being forced to use a heavy hand in dealing with the acts of terrorism from Gaza, which in turn will cause the pot of trouble to boil that much hotter. It will soon boil over just as the Bible has foretold. The eruption of major war is imminent. It is important for God’s people to remember that happens in Israel is a direct sign of how close we are to the end of the Age. We are on the very knife’s edge today!

Pastor R continues praying for 400-500 people per day with the help of 40-50 of the HOB missionaries. God continues keeping him functioning enough to continue this work. I know the enemy would like to see him taken out, but it is God who is in control of his life, not Satan! He however needs our continued support and prayer.

For those that would like to help financially with this great work, the easiest and quickest way is through the PayPal button provided on this site. All gifts coming in go straight to Pastor R and the missionaries. All 2,200+  HOB missionaries survive totally by faith, including Pastor R. This means there is no paid staff, nor is there overhead other than phone costs which are necessary to stay in contact.