This morning as my wife, Anne, and I were sitting in our living room and discussing the current news, we both felt a real heaviness in our spirits. A factor that of course added to this feeling was the last two mass-shooting incidents here in the United States, one in El Paso, Texas, and the other in Dayton, Ohio. These happened within less than 24 hours of each other. As usual, there will be the political grandstanding that we constantly hear from politicians and the talking heads of media personalities, and the blame will as usual be placed on the weapons used. I will not get into the politics of it, but it is not guns that kill people. It is people who kill people! People have been killing people since the days of Cain and Abel, and they have done it with whatever instrument they could get their hands on, even if it is just a garden shovel. The problem is in the heart of man, and it is the god of this world, the fallen Lucifer, who Jesus said comes to steal, kill, and destroy. And he is doing it in abundance! It is not going to get better. In fact, until the Prince of Peace comes and forcibly takes over a world gone mad, the rebellion and rage against God and His ways is going to bring a judgment from on High worse than anything this world has ever seen in its blood-stained history. These are not my words, but rather words spoken by Messiah Jesus, Himself.

The Bible tells us that violence on the earth became so great and grievous in the days of Noah, that God brought about the great flood and wiped the entire human race, as well as the animal kingdom from the face of the globe—other than eight humans and an ark full of animals that God chose to repopulate the earth. One of the signs given that announces the soon return of the Messiah, our Lord Jesus Christ, is that the world would resemble the days of Noah and also the days of Lot. It has just been a handful of years ago that I believe a particularly vile spirit of hatred has come upon the earth, and this spirit is what is behind the mass shootings and mass killings via suicide vests and car / truck bombs, etc. We have also seen how individuals run their vehicles directly into unsuspecting crowds of people, and for what reason? Hatred. Pure hatred.

The last ten years has also brought about the greatest attack on God’s design of marriage between a man and a woman, just as in the Days of Noah and Lot. Whatever God creates as beautiful and according to His perfect design, the fallen one corrupts. He has done the same with music and so much more.

The purpose of this Mideast Update however is not to reminisce on world events and the days of evil we find ourselves in today. The two however do coincide. Today’s update is of God’s people living in the area of our planet that surrounds the epicenter—Israel. All of the raging upon our planet today, in one way or another, has to do with what is happening in the modern day State of Israel, and the imminent rebuilding of the Third Jewish Temple. It has been said that Israel is the hour hand on the world clock; Jerusalem is the minute hand, and the Temple Mount is the second hand. The second hand is near the midnight hour and what is happening around the world—especially in the Middle East reflects this very thing. The fallen Lucifer knows the Messiah’s return is now imminent and he knows his time is very short. He is desperate to get his evil plan for his hoped defeat of the Messiah and the total ruin of God’s prize creation, mankind, completed. The hellish demonic influences on planet Earth are growing exponentially, preparing for a full release of what has been imprisoned within the Abyss. The perilous times the Apostle Paul told Timothy about, have indeed arrived. 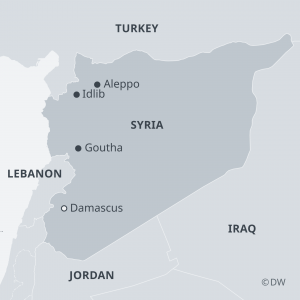 As regular readers know, one of the most desperate locations in the past months has been in the Aleppo / Idlib area. It is in this area that the terrible Syrian Civil War is now concentrated as Bashar al-Assad tries to wipe out the last of those who are against his leadership as dictator of Syria. The Russian Federation, which is allied with Assad, along with the Syrian regime’s forces have continued with indiscriminate bombing, sometimes with chemicals containing nerve gasses or chlorine. The barrel bombs have also continued being dropped into civilian residential locations. Part of this of course is because many of the rebels are located within civilian populations, but this does not take away from the horror and carnage having to be endured by the innocents. The Syrian civil war has now lasted over eight long years. It has been written about on this website now for over seven years. 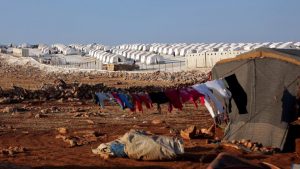 Sister Mufiedah and the Widow Sisterhood continue putting their own lives on the line in NW Syria. As of a couple days ago, I read that there is once again some type of ceasefire being proposed, but I don’t know yet if there is any reality to it. In the meantime, the House of Blessing missionaries continue to treat and minister to as many of the injured as they can possibly get to, including burying their dead. There are only 24 hours in a day and the human body needs sleep and rest or it will collapse. Yet, God continues to strengthen them day after day, week after long week. The treatments they perform with the victims all have to be done without anesthesia—including removing bullets or shrapnel. I can’t even imagine having to do what they have to do. Nor can I imagine the patients having to endure what they have to endure. Yet, this is what it is like for many that can not be reached by official doctors.

The confirmations of the vast number of hospitals and medical clinics that have been targeted during this civil war are in abundance. Hundreds of doctors and medical staff have been killed. The ones that are there to help others end up with no one to help them when they are injured in a bombing. Many makeshift medical facilities have been set up in basements or even caves but the demand for medical attention during war times like this are way too great for the professionals to keep up with. The photo on the right shows one of the clinics that has been bombed.  The photo below shows a bombed out hospital. This is where the Widow Sisterhood step in. Mufiedah and those with her were able to save an entire family of eight just days ago in one of their rescue missions.

Many of the HOB community of believers become numbered with the victims and unfortunately, also as casualties. As has been said so many times in these updates, it is the injuries and deaths of innocent children that are the hardest to deal with. It is the world they were born into. What if you and I had been born into situations such as theirs? This is why we need to care about our “brethren” around the world. Praying for those God has put before us must be a serious business! It is a great blessing when they receive financial blessings. The Apostle Paul set the example in the New Testament during the days of the early Church by gathering financial help for the churches that were struggling the most. The true love of God within a person leaves no room for a true child of God living a self’centered existence.

The last time when I spoke with Pastor R, he told me that the number running for their lives from the Aleppo / Idlib region is actually well over 700,000. There are always a large number of HOB missionaries that follow the crowds so that they can be in place to, not only minister to their physical needs if possible, but also share the love of God with them by telling them the Good News about Jesus, the real Messiah.

In other locations, the regular work of the HOB missionaries and teachers continues as the Lord provides the means to do so. Communion, as has always been the case, is the high point of all Christian life in the Mideast for the HOB community of believers. They celebrate, they commune with their Lord, they experience spiritual refreshing and healing as the power of the Holy Spirit comes down upon them in a very special way.

God does the same with the many HOB brethren that pray for people, many times by the hundreds, as with Pastor R and Pastor Farid. As you might remember, it was Pastor Farid that was healed of blindness and then all seven of his children when he went home and prayed for them. Their ministries have been very effective and many lost souls are being reached.

This last couple weeks, the House of Blessing was able to purchase ½ truckload of emergency wheat and beans. Many thousands of desperate people were able to eat. Many of these were ripe to hear the Gospel message and became followers of Jesus Christ.

The House of Blessing School of Ministry is still continuing wherever they can. HOB does its best to supply one meal a day for the students. These students study their courses at least ten hours a day.

All of the HOB missionaries, staff, and volunteers are very busy; each in their own categories of responsibility. All know that the return of the Messiah is imminent for His faithful Church. It seems that the persecuted Church is much more aware than the affluent Church of the West. Sad. Will events change in the West just prior to us hearing that great Trumpet Blast calling us home? Only God knows, but I suspect the West may need a real shakeup that wakes the Western Church out of its stupor. We are at the end of the Age and most don’t realize it, or just don’t want to! We may need some help…

Let us all be busy about the things of the Lord today. The Bible tells us to watch, pray, and stay occupied with what concerns the Kingdom of God. As the HOB missionaries are reaching people by the score among the 700,000 today near the Turkish border, so we need to let those around us know what time it is and that TODAY is the day of salvation.