As anyone knows that keeps up on the world news, the warring going on in the Middle East has not slowed in the least. If anything, it continues to escalate. Many nations are represented by the military forces opposing each other. In Syria the figure of the dead since the civil war began in March of 2011 varies. The Syrian Observatory for Human Rights has a figure of 240,381 to 330,381 killed through August 5, 2015. This is a staggering number and only represents the dead in Syria, not any of the other nations around Syria. Unofficial reports are coming in with higher numbers yet.

This update is not the proper venue to go into an explanation of the sources of the many conflicts and what is really going on behind the scenes internationally. The facts are complicated and the entire war situation is changing from day to day. Just in the last couple days, as I was checking news sources, I found that Russia has sent Bashar al-Assad six MiG-31 jet fighters. They are also bringing in an enormous amount of heavy duty sophisticated weaponry which will take at least two or three days to unload. All this is designed to keep Syria’s dictator, Assad, in power. Russia has great strategic interest in Syria and has no intention of losing a grip on it.

I also noticed in the news that Israel is getting ready to go over the border into Syria with its military to aid the Druze. The Druze have many relatives in northern Israel. Israel is, however, trying desperately not to get drawn into Syria’s civil war. Bible prophecy tells us that Damascus and the entire area around it will be obliterated. It will happen overnight and the Scriptures even tell us who is responsible. Below are two excerpts of the prophecies from the Old Testament that speak of the destruction of Damascus:

“Behold, Damascus will cease from being a city, and it will be a ruinous heap. The cities of Aroer are forsaken, they will be for flocks which lie down, and none will make them afraid. The fortress also will cease from Ephraim, the kingdom from Damascus, and the remnant of Syria: they will be as the glory of the children of Israel,” says the LORD of hosts…at eventide, trouble! And before the morning, he is no more. (Isaiah 17:1-3, 14)

Against Damascus: “Hamath and Arpad are shamed, for they have heard bad news. They are fainthearted; there is trouble on the sea; it cannot be quiet. Damascus has grown feeble; she turns to flee, and fear has seized her. Anguish and sorrows have taken her like a woman in labor. Why is the city of praise not deserted, the city of My joy? Therefore her young men shall fall in her streets, and all the men of war shall be cut off in that day,” says the LORD of hosts. “I will kindle a fire in the wall of Damascus, and it shall consume the palaces of Ben-Hadad.” (Jeremiah 49:23-27)

This event is imminent! The reason I am referencing this in today’s update is because in the middle of the chaos all over this dying world, the Almighty GOD has His faithful ones sharing the gospel of Jesus, the true Messiah. There are a number of missionary organizations represented in the Middle East today, and it has been my privilege to write updates from the front lines for one of these for nearly 3 ½ years now, about 13 months after the beginning of the Syrian civil war. House of Blessing has approximately 500 volunteer missionaries scattered all over Syria, Iraq, the Kurdistan area, Jordan, and well into western Iran. These missionaries are mostly male, but there are about 100 or so widows who we affectionately named “The Widow Sisterhood” many months ago.

These missionaries are immersed in Iraq, Syria, northern Jordan, and the Kurdistan area, among the millions of war refugees. Hardly a week goes by without a number of missionaries being killed while ministering the Word of God to the Muslim people there. This last week was no exception. Pastor R***** reported that several men lost their lives while ministering in Iraq.

The situation with the war in Syria and Iraq has gotten much worse as of late with the joining into the coalition by the Turkish military. Turkish war planes have been hitting many sites with missiles and bombs in both nations. As you will see in the links and photos below, there have been a great many casualties.

In the midst of all this chaos, the missionaries have been doing everything possible to minister to the victims of the fighting, treating their wounds and praying for them. House of Blessing has also brought in truck loads of wheat to feed the people. As has been mentioned in earlier updates, the United Nations is only meeting about 45% of the needs.

Because of the great harvest of souls during the Muslim month of Ramadan, the HOB missionaries have divided the multitude of new believers up into small groups and are teaching them the basics of Christianity. For those in the West who may have been raised in church, it is hard to imagine the great excitement these folks express when they have an opportunity to learn. Many in the churched West have heard sermons and teachings about Who Jesus really is and why His Blood is so unique, but in the Muslim Middle East, the people know none of these things. We as Christians speak of having an intimate relationship with God, but Muslim people have never been taught that they can have this kind of a relationship with Allah. The missionaries also teach the people about the grace of God. There is no grace in Islam. There is also no assurance of where one will spend eternity in Islam. Islam and Christianity are not similar religions as some in the West are trying to teach people. They are opposites in more ways than not!

This last week, with the great amount of casualties, especially in the north, Mofidah has taken sixty of her widows into the middle of the killing fields. They search among the war victims for those who are still alive in order to pray with them. Many of them are healed; many others pray the sinner’s prayer within the last minutes before they slip into eternity. Within the last day and a half before receiving this update, about 125 souls were reached by the widows. The widows continue to work day and night in order to find people before they die. For any of us that have never seen such things, walking into any of the war zones in the Middle East would be like walking into a horror show. The missionaries however see these things on a daily basis.

I was treated to a special blessing this week. Pastor R***** called me a second time and put another man on the phone to speak with me. The man has been a believer for about three years. As well as discipling him as a new Christian, Pastor R***** has also taught him English. His English is, of course, still broken, but I was able to understand him quite well. I found this man delightful to speak with. He already knew who I was and so no introduction was necessary. For the next 20-25 minutes, this man who had been a Muslim sheikh before becoming a believer in Jesus Christ, shared the incredible joy he has because of the second chance he has been given through the sacrifice of Jesus, the Messiah. He went on and on about the changes this has brought into his life, his outlook on the future, and of course his relationships with the people he ministers to.

I won’t use the man’s name in this blog in case it is not a common Arab name. His visit to Pastor R*****’s field tent was to give a report from the area where the widows are working at this time. He described to me watching the women minister to the wounded. He said the power of the Holy Spirit working through them is astounding. God is truly doing amazing things in these last moments of this age. This former sheikh testified to how blessed the former Muslim people are because they also recognize the second chance they have been given due to the incredible love of God.

The Word of God is spreading like wildfire in the Muslim world today. In the midst of the horror, death, and brutality of Satan’s minions, the Spirit of God is touching those whose hearts will respond. Very soon now, our Master will call His own out of the way of what is coming, and this wicked world will be judged. The Bible tells us that the Great and Terrible Day of the Lord, the Great Tribulation will be a time like none other that this world has ever experienced, or ever will again. We must continue to pray earnestly for those who are on the front lines. For those of us still living in relative freedom, our priorities must also be directed with eternity in mind. God’s people are about to go home! It won’t be long now.

The photos below are just eight of the thousands being taken in the killing fields of Iraq and Syria. It is in the midst of such horror and misery that Christian missionaries are doing their best to share the love of God through the message of Jesus the coming Messiah and KING, and also by ministering to the needs of the people, whether it be treatment of wounds, prayer for healing, and food. Bible studies are also being held in scattered locations all over the mideast. Bibles are also given out as they are available. 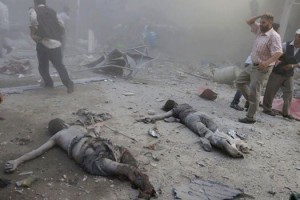 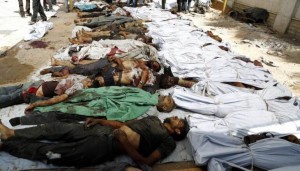 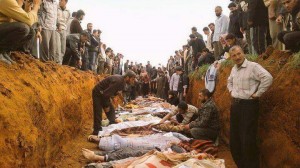 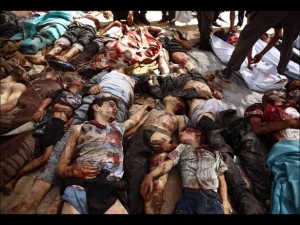 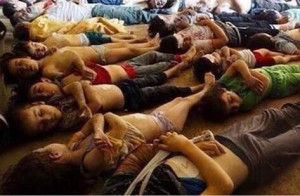 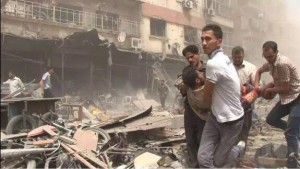 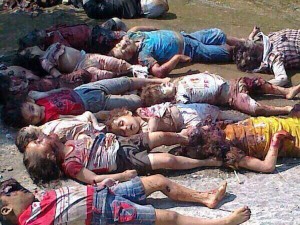 The bombing runs in Syria and Iraq are scattered all over both nations, and involve the air forces of many nations. These are just a handful of news articles: