Even though there was only one Apostle Paul, variations of his salvation story can be told by countless believers and followers of Jesus today, who at one time had declared themselves His enemies. A small portion of Paul’s lengthy testimony before King Agrippa of His encounter with Jesus on the road to Damascus reads this way:

13 “…at midday, O king, along the road I saw a light from heaven, brighter than the sun, shining around me and those who journeyed with me. 14 And when we all had fallen to the ground, I heard a voice speaking to me and saying in the Hebrew language, ‘Saul, Saul, why are you persecuting Me? It is hard for you to kick against the goads.’ 15 So I said, ‘Who are You, Lord?’ And He said, ‘I am Jesus, whom you are persecuting. 16 But, rise and stand on your feet; for I have appeared to you for this purpose, to make you a minister and a witness both of the things which you have seen and of the things which I will yet reveal to you. 17 I will deliver you from the Jewish people, as well as from the Gentiles, to whom I now send you, 18 to open their eyes, in order to turn them from darkness to light, and from the power of Satan to God, that they may receive forgiveness of sins and an inheritance among those who are sanctified by faith in Me.’ 19 Therefore, King Agrippa, I was not disobedient to the heavenly vision…” Acts 26:13-19

Saul, who was later renamed Paul, had been a high-ranking Pharisee who had the authority to arrest, imprison, and even execute Christians wherever he found them. His trip to Damascus was for that very reason when he encountered Jesus, the very One whose followers he was persecuting. The change in Paul was so complete that instead of persecuting followers of Jesus, he became one of them, and eventually commissioned as an apostle by Jesus Christ.

Radical conversions and changes of directions in life is what the House of Blessing has seen in many who turned from a life of killing infidels as ISIS or Hezbollah militants to the life of Christ-followers. What a radical change!

One of the newest accounts has to do with seven militants who were found in desperate need of medical help. These men, who in the past had feared no one, had been badly injured and although still armed, were in a very vulnerable condition. As Omar, Sami, and Mussa began to walk in their direction, the wounded militants began to shoot at them with their machine guns. The three HOB missionaries immediately put their hands up in the air in the direction of the men shooting at them and began to pray loudly in the spirit. Although the bullets still came at them, they had no effect whatsoever on the missionaries. It was like they were protected by an invisible shield!

As Omar and his companions got closer to the shooters, they recognized that these men were the same ISIS militants who had nearly beaten them to death not long ago. Omar then spoke to them, reminding them of the severe beatings and the Bibles that had been confiscated from them. The militants, who were actually five still alive and two who had already died, were visibly shaken by what they just saw happen. They then asked what language they were praying in. Once again, Omar, as he had at other times in the past, explained that this was a language given by the Spirit of God, and it was the power of the Spirit of God that protected them from the bullets. The five surviving militants then asked if Omar and his missionary friends could help them.

Omar told them that help was available if they really wanted it. He also told them that if they wanted to experience the miracle of God’s intervention in their lives, they needed to experience God spiritually first. This would require them to ask God to forgive them of their sins and allow Him to take control of their lives from this day forward. After answering some questions that the stricken men had, they asked to be taught about God and His Messiah as the missionaries knew Him. One by one then, the militants prayed the sinner’s prayer. The men then asked their new missionary benefactors to forgive them for what they had done to them. Omar answered by telling them that they had been forgiven from the moment they had begun to beat them, telling them that Jesus Himself, as He was being crucified, prayed saying, “Father, forgive them for they don’t know what they are doing.” Omar, Sami, and Mussa then spent some time talking with them about what had just transpired, and then took them to a nearby camp to be cared for until they were completely healed. Note: In the photo below, you can see what our missionaries often face. 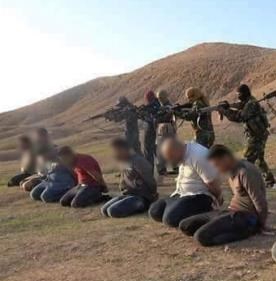 This story continued when 20 of the sons and younger acquaintances of the five former militants came to either retrieve them from captivity or if they refused to leave, force them into repenting of their new allegiance to Jesus Christ, and go back to following the ways of the prophet Muhammad. As they approached their fathers and the missionaries caring for them, they raised their machine guns and demanded that they immediately get up and leave with them. The five didn’t make a move other than raising their hands and asking the militants to listen to what they had to say.

They related to the twenty ISIS militants the story of how they had previously viciously attacked Omar and his missionary friends and how these same missionaries were the ones to come to their aid when they themselves had become victims to gunfire. They also testified to how they had tried to shoot and kill them but could not because they were protected by the invisible hand of God. They then went into detail in how they now were experiencing a peace and joy that they had never ever experienced before. They testified to the assurance of complete forgiveness for all the horrible sins they had been guilty of and the assurance of an eternal home in the Kingdom of Heaven.

When they finished testifying to these 20 men, they also asked to get to know God as the older men were beginning to know Him. And, as with the five men earlier, these 20 also, one at a time, prayed the sinner’s prayer and became followers of Jesus Christ. The miracle continues…! Soon we’ll hear of the entire families and close acquaintances of all 24 of these men finding Jesus as their Savior as well. God is good!

The rest of the HOB missionaries continue the work of evangelizing the lost, just as they have been. Many hundreds of families have been individually visited and, no matter how much time it took, were led to the feet of Jesus. Each family was given some of the Oregano tea mixture and all were prayed for. The work continues as this update is being written.

Suleiman, his sons, and the volunteers working with them also continue doing everything they can do to help. Suleiman has been arranging to get at least one Bible to be shared between about 30 new believers. What a blessing to hear how these many people who at one time had followed the demonic teachings of Islam are now reading and studying the Bible. Instead of looking for infidels to torture or murder, they now share the love of God with them. Praise God!

Pastor R just had surgery once again. The doctors removed a very infected big toe and tissue around it. We need to pray that the gangrene is stopped from going into the rest of his system. Thank you all for your prayers. We don’t know why Pastor R has not been healed as so many others there in the field have been, but God knows. We have to remember that the wisdom of God is much greater than any wisdom we think we have! The Bible tells us that “All things work together for those who love God and are called to His purposes.”  You notice the verse says, ALL things!

With that I will conclude today’s update. All of the House of Blessing is grateful for all your prayers. God answers prayer!

Continue to Watch and Pray! Jesus’ return for His people is very, very near!