As the Middle East continues to change, the work of the House of Blessing missionaries continues. Over the last handful of years, this work has spread from one mideast nation to another. The enemy of our souls was on the attack from the very beginning of this project as Pastor R was directed by the Lord to begin ministering over the border in Jordan. Almost immediately. Bibles were carried into Jordan and the missionaries began to share the Greatest Story ever told; the story about Yeshua coming to earth to die for man’s sins. The message immediately began to touch hearts and many began to respond by praying the sinner’s prayer and asking Yeshua to become the Lord of their lives. At the same time, the enemy began to attack and lives began to be lost. Christianity is not acceptable in any Muslim community and according to the teachings of Islam, the infidel deserves nothing better than to be tortured and killed in the name of Allah and his prophet.

The New Testament tells the same story many times, starting right from the beginning of the Book of Acts after the Day of Pentecost. Immediately the Spirit of God began reaching the hearts of the listeners of the Apostle Peter’s sermon and thousands began to accept Yeshua as the Messiah and coming KING. A few of the words of Peter tell the story:

“Therefore let all the house of Israel know assuredly that God has made this Jesus, whom you crucified, both Lord and Christ.” Now when they heard this, they were cut to the heart, and said to Peter and the rest of the apostles, “Men and brethren, what shall we do?” Then Peter said to them, “Repent and let every one of you be baptized in the name of Jesus Christ for the remission of sins; and you shall receive the gift of the Holy Spirit, for the promise is to you and to your children, and to all who are afar off, as many as the Lord our god will call.” Acts 2:36-39

If we were continuing this passage, we would read about the first 3,000 that made a commitment to be followers of Jesus that day. But as quickly as the Spirit of God began to move, so did the devil. In the third chapter of Acts, we have the stunning miracle of the lame man being healed, who then ran all through the crowd of many thousands of people, proclaiming the miracle he had experienced. This immediately caused the religious leaders to have an emergency meeting to decide what to do with the apostles and the events that were unfolding. As a result, Peter and John were brought before the authorities and threatened.

As the early church explosively grew in numbers, the persecution grew as well. Stephen became the first of the martyrs, as told in Acts 7. Later the Apostle James was beheaded and Peter was imprisoned. The early church went through tremendous persecution for their faith in Jesus Christ. This has continued for nearly 2,000 years now. There were more Christian martyrs since the twentieth century than from 30 AD until that time. From 2,000 to 2,010, another million were added, and the numbers continue to escalate every year.

About two years after House of Blessing went over the border to begin proclaiming the Gospel of Jesus Christ, ISIS was formed and became one of the most brutal and barbaric persecutors. While many thousands were being reached with the Gospel of the power of the Blood of Jesus, the blood of many hundreds of HOB missionaries and new believers under their charge was being spilled every year. But, the growth of the underground church in the Middle East has been astounding!

One of the more remarkable stories I have been able to pass on is that of Sister Sarah. I have received numerous comments from folks over the past few weeks referring to what God is doing through this precious saint of God. I found out that the classes that are being taught to over 1,500 of those that found Jesus as their Messiah have gone very well. Pastor R shared with me the privilege he himself had to be able to visit every one of the 24 teaching locations and see for himself how well the teachers of the classes are passing the materials on and also how easily and quickly the new believers are learning what is being taught. He said it was a humbling experience to see what God is doing! Pastor R said that as many Bibles as possible were purchased with the gifts that came in from HOB supporters, and then they again mass-copied earlier teaching materials for use. The materials used are full of complete Scripture quotations which makes it possible for the students to memorize many Bible passages—even without having a Bible that they can call their own. Because these Bible students study so many hours a day in order to complete the intensive course as quickly as possible, HOB does what they can to provide something to eat during the day. God has made it possible for them to provide one meal a day. God is good! 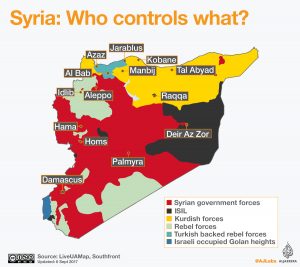 As the political situation in the Middle East continues to change, the identities of the main culprits bringing the persecution may change, but the persecution does not. The ISIS militants are being driven out of their locations and many trapped out in the desert. Unfortunately, what is not being reported for the most part is that the Shia Hezbollah terrorists are moving directly into many of the vacated ISIS locations. For those that have read these updates for a long time, you will remember that many HOB missionaries have been murdered by Hezbollah militants. In fact, it was at the hands of Hezbollah militants that Pastor R was crippled not long after he moved over the border into Syria from Jordan. There are also many other Islamic terrorist organizations located all over the Middle East. Even the Iraqi and Syrian soldiers have killed many of the missionaries and members of the Christian community. Yet, day after day, the work of the Great Commission goes on.

In northern Syria where Mufidah and Fatwa and the Widow Sisterhood are,, the Lord continues to bring the injured to these wonderful women. The widows were able to minister to 37, treating their wounds, whether bullets, shrapnel, or other issues. Each one then also accepts Yeshua as Messiah and prays the sinner’s prayer.

The missionaries in northern Syria have reported 280 brand new believers as a result of the ongoing evangelizing. Praise God! Unfortunately, nine more missionaries were killed for their faith. They are now in the presence of their Master. Their suffering days are over forever!

In the Fallujah area, Adel has reported that another 180 were added to the community of believers there. They also lost some of their brethren. Four of the new converts were killed and have joined those lost in Syria at the feet of Jesus.

Regular readers will remember that there were a large number of dead left on the streets. The HOB missionaries have been doing what they can to get as many buried as possible. This time they managed to bury 120 of the dead. Many of the dead were HOB missionaries who also paid the ultimate price in their love for their Master. While the dead were being buried, the evangelism continued and over 600 more souls were added to the underground church in northern Iraq.

In all areas the communities of believers continue to gather for special communion services, whether in large or small groups. It continues to be the highlight of their week. Fatima and those around the Fallujah area had over 600 this past week and Hafezah and Ferial served over 500. As always, there are other groups meeting elsewhere that are not counted.

In Kurdistan, 75 are still being discipled and in western Iran another 50. These will soon be out evangelizing on their own. More will be added to the harvest.

I received news about Omar and Same. You will remember that they were in a group meeting after the teaching time when they and a third brother were shot. The third brother, a man named Nader, was killed instantly but the other men survived the attack. I just heard that both Omar and Same have diabetes which is keeping them from healing as they should. Also, it appears that gangrene is setting in. These men will need an immediate miracle or they will have to go to the hospital if their lives are to be spared. We serve a God that is more than able, so let’s pray earnestly for His intervention.

In the meantime, Pastor R is giving special training to six men who will step in and complete teaching the course to the three groups of 500 students that are in the middle of their studies. Praise God for those who are willing to take on such a task as raising up new missionaries as Same, Nader, and Omar had done. God is still in control.

In closing, Pastor R was quite sick for three days but the Lord has intervened once again and he is back doing what God has called him to. He really needs and cherishes the prayers of those whom God has called to be a support to this ministry.

Once again, I would like to thank each and every one who has sent gifts towards Bibles and other supplies. Each dollar is carefully and prayerfully spent. The needs are great and they continue to grow as more are added to the numbers of souls reached who then become part of the underground church in the Mideast. I especially want to thank each one who has been praying faithfully for the House of Blessing. We serve a God who answers the prayers of His people. We are now very near to the call home from our Lord and Master. What if He called us tomorrow? Have we followed through on what He has asked of us? We only live once and will never pass through this testing ground again. Let’s finish well!