I received an urgent request for prayer this morning that I want to pass on to you. In order to get this out quickly, I will write the regular Mideast Update in a second posting to the blog site.

It wasn’t all that long ago when an urgent request was sent out for special prayer for Pastor R concerning his feet. For those that are familiar with the House of Blessing story and all of the events of the last 6+ years, you know that Pastor R has gone through enormous physical challenges, mostly due to deadly physical attacks on him. He has been beaten, stoned, badly cut, and left for dead more than once. He has had his skull fractured more than once and endured an 11 hour surgery on his head. The doctors lost him on the operating table three times, but God brought him through. I had the privilege of praying with him ten minutes before him going into surgery, and then right after he came out. Due to a severe beating he received at the hands of several Hezbollah militants several years ago, Pastor R has been in a wheelchair ever since, but God has sustained him. The Lord even redirected a missile that was coming right at him, turning it 90 degrees to one side to spare his life. Many other things have happened that I won’t go into today, but suffice it to say that God has supernaturally intervened many times on his behalf, and it has been due to the continued prayers of God’s people.

Today, another urgent situation has come up. One of Pastor R’s feet that had previously been healed up has become infected once again. The brothers around him insisted on taking him into a hospital where the doctors cleaned the wound out, making a large opening in his foot that nearly goes to the bone. The most disturbing thing the doctors said was that he again has gangrene in his blood system. They strongly insisted on his staying in the hospital there at near his location in Syria until the wound is healed, but he refused because of the expense. In his words, the devil has done everything he can to cripple the work of the ministry, including financially, and he refused to use funds for his own medical care when other needs of the House of Blessing are so great. 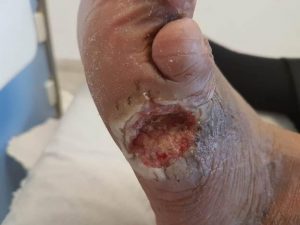 Pastor R asked the doctors for some medicine he could take back to his tent at the refugee camp he is embedded in, and they reluctantly did so. He was given some antibiotics and also some pills to help him with the headaches and fever he is suffering with due to the infection. His temperature has been running between 38-40 C (100-104 F). They however refused to take any responsibility for what happens with his foot, because if the infection does not clear up, he would likely lose part of his leg, or even his life. Pastor R said he will trust God to intervene and heal him in his tent rather than through a month or two at the hospital.

That is the request I am making with this urgent letter. Please take this need to the Lord in prayer right away, and call others to prayer as well. The end of the age is very, very near and Pastor R would like to finish the task God has called him to, and not be taken out of action before he’s finished.

Thank you all, because I know you will take this critical need to the Lord in prayer. Regardless of miracles we have seen come to pass or not, GOD DOES ANSWER PRAYER! The Scriptures tell us that Jesus Christ is the same, yesterday, today, and forever.

NOTE: For those that would like to contribute to the missions work of the House of Blessing, you will find a convenient PayPal button on this site. All funds go directly to the work of the missionaries. There is no paid staff; all live totally by faith.