As I get ready to send out the first Mideast Update for 2017, I want to first say thank you to all the people around the world that have responded to the urgent prayer need for Pastor R in the last few days. I have sent out several short urgent prayer notices, and judging from different comments I’ve seen, there was a great response…and God answered.

When Pastor R was operated on the first time in order for his infected cecum to be removed, it became apparent to the physicians that something was not right with his blood. They found, by way of their medical tests, that something was poisoning his blood. The way it was described to me, the doctors found evidence of gangrene somewhere in his system. Once they began their search for the cause, they found that two of the serious injuries he had received some months back during an attempt on his life, had gotten badly infected and needed to be opened back up and cleaned out. This has now been done, his blood has been cleansed, and additional blood given to him as needed. It’s a blessing that the doctors noticed the problem and found the source. We praise God because Pastor R has been suffering for quite some time with a lot of pain as well as other symptoms. 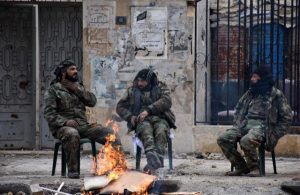 As far as the ministry of House of Blessing, the work goes on. At this time much is changing in Syria. It seems that a truce has been declared between the government forces and the rebels. It remains to be seen if this truce in fact holds. Much of Aleppo is destroyed, but people are going back to try and rebuild. Not all is quiet now but the lull in the fighting is certainly welcome.

The weather however is not taking a break. The winter has come in strong and between the wind, rain, and snow, hundreds of tents have come down. HOB’s missionaries are doing their best to help all they can. They have become quite experienced at this since the refugee crisis began. In the last few days, they have managed to get over 350 tents back up and secured to the ground again. Financial gifts that came in were timely and a great help in a number of ways. The money helped get another 121 of the dead buried, another amount of wheat was purchased and distributed to some of the starving people along with other supplies that were desperately needed.

Mufidah and the Widow Sisterhood are still ministering to the injured. Just between Mufidah and her assistant alone, another 21 of the seriously injured have been ministered to and are on the way to recovery. Each one has also become a follower of Messiah Yeshua. In the Aleppo area there are still 240 HOB missionaries embedded in the refugee camps. Another 450 recognized their need for Yeshua and asked Him to become their Lord and Master. And, in the middle of all the wind, rain, and snow, Hafezah still managed to serve communion to over 800 believers! It’s a continuing miracle that is hard to fathom!

In Fallujah, Iraq, another 20 new believers lost their lives. The situation continues to be very difficult. However, another 150 souls were reached and Fatima was able to serve communion to about 700 believers! 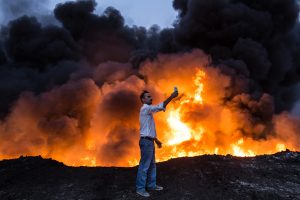 In Mosul, the situation continues to be brutal. The fighting is taking the lives of a great many civilians. Among that number these last few days were another 70 of the recently converted. But, at the same time, 1,200 lost souls became new believers in Jesus Christ, the Messiah! The people are very open to the preaching of the Gospel of Jesus and the power of His Blood to forgive sin and provide hope–maybe not much hope for the wretched life that most of them are presently living, but they now do have hope for an eternity as a child of God and all the blessings that are part of the inheritance God has promised to the true believers in Jesus.

When Pastor R and I spoke about the 56 widows that were in treatment and recovery from their two years of slavery to ISIS jihadists, I found out that they were integrated back among the rest of the believers and we need to pray that they can continue to recuperate and find permanent freedom from the horrid nightmares and other symptoms they struggle with. One sad note was that three of these women disappeared and have not been found yet. Let’s pray that they have not been recaptured and that nothing else bad has happened to them. The missionaries are continuing their search for them. 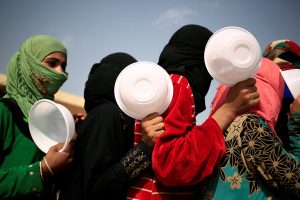 In conclusion, all of House of Blessing wants to thank everyone that has so faithfully prayed for them and also given so sacrificially. God has done amazing things during the past 2016 year. When the past year began, we were not sure if the year would be completed before the Messiah called His true Church home. It is even more so this year. As we watch world events unfold, we can see how the stage is being set for the final confrontations between nations, but most of all, it is quite apparent that the devil is becoming desperate because he knows his time is very short. The gradual cornering of the nation of Israel by the entire world is one of the greatest signs yet that the Master instructed us to watch for. And, as all of these things are unfolding, the signs in the heavens are becoming more and more ominous every day. But, as we see all these things, we do exactly what Jesus instructed us to do…look upward, because our redemption is now very near!

This of course reminds us that we yet have the opportunity to finish well. Whatever it is that the Lord has laid on our hearts to do for His kingdom needs to be done quickly. Time is almost out! Once that moment has been reached, there is no going back to do anything over. Let’s do our best…today!

Always in His Service,

Donations can be made through PayPal using my e-mail address:  [email protected]