As I was preparing to write today’s Mideast Update, I found myself thinking about how Jesus had foretold the future great harvest of Gentiles into the Kingdom of God. After the parable of the wicked vinedressers in Matthew 20:33-41 we find these two verses:

Jesus said to them, “Have you never read in the Scriptures: ‘The stone which the builders rejected has become the chief cornerstone. This was the LORD’s doing, and it is marvelous in our eyes.’ Therefore I say to you, the kingdom of God will be taken from you and given to a nation bearing the fruits of it.” Verses 42-43

Another passage in the Book of Acts reads like this:

On the next Sabbath, almost the whole city came together to hear the Word of God. But when theJews saw the multitudes, they were filled with envy, and contradicting and blaspheming, they opposed the things spoken by Paul. Then Paul and Barnabas grew bold and said, “It was necessary that the word of God should be spoken to you first; but since you reject it, and judge yourselves unworthy of everlasting life, behold, we turn to the Gentiles. For so the Lord has commanded us: ‘I have set you as a light to the Gentiles, that you should be for salvation to the ends of the earth.’ Now when the Gentiles heard this, they were glad and glorified the word of the Lord, and as many as had been appointed to eternal life believed. Acts 13:44-48

Now lest someone think that the Jewish people have been totally cut off from salvation and the Church has taken their place,, a study of Romans, chapters 9-11, makes it quite clear that this is not the case. In fact, the prophecy of the 70 weeks given to the prophet Daniel in Daniel 9:24-27 makes it clear that God has promised the Jewish nation a specific number of years in which He will deal with the nation directly. Historically, we know that 483 of these years ended at the passion of Christ, leaving seven years. We have had an interlude of roughly 2,000 years of Church history since that time but it is now coming to an end. It will be at that point that God will keep His promise to Israel and give them the last seven years of their promised attention from Him. It is during this period of time a great number of Jewish people will come to recognize that they missed their Messiah two millennia ago.

The times of the Gentiles however are not over, nor is the great Gentile harvest. The Church Age which began in the first century AD still continues today but as said above, is swiftly coming to an end. This generation is witnessing an escalation of Bible prophecy coming to fulfillment before our very eyes, like never before. After Jesus had given a long list of prophetic events to watch for, he said these words:

“Now when these things begin to happen, look up and lift up your heads, because your redemption draws near.” Luke 21:28

My task has mainly been to pass on the information I receive about what God is doing through the House of Blessing in the Middle East. God, however, is moving all across the world and millions upon millions are being reached with the Good News of the Gospel. There are those that say that there are more born again Christians today in China than there are in America. Through reports being made available by numerous Christian missionary organizations, the harvest of souls is being witnessed in nations around the globe. The last decade has seen the greatest influx of new believers and followers of Jesus Christ than ever throughout the duration of the 2,000 history of the Church Age. What an amazing time we live in!

Now back to the Middle East and the House of Blessing… 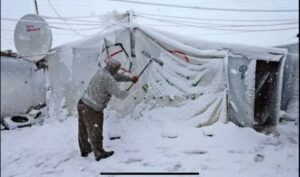 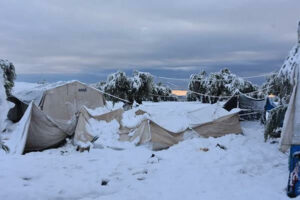 Much of the Middle East was covered by snow a few days ago. Much of the world heard about Jerusalem being covered by snow and photos provided on the internet showed how beautiful it was. The snow and cold temperatures however are miserable for people trying to survive in the refugee camps, especially in the northern areas where temperatures tend to drop lower. I was told by Pastor R that the most recent snow storm was a strong storm and brought misery and hardship to many people.

Omar and his team of missionaries as well as Mufiedah and her team are still separated from most everyone else until they completely recuperate from whatever flu or virus had sickened them. They are now however nearly recuperated and will be back on the front lines again very soon. Those taking their places have stayed very busy keeping the work of the ministry going.

Osama, one of the brothers temporarily taking Omar’s place, found a small supply of lintels and bread. He took what was found, divided it up among several teams of missionaries. Each group then took what they had and continued passing the supplies out to the needy until they ran out. Each missionary group divided up into two groups. One group worked during the day and the other at night. As they began to pass out what they had to give out, each group found that their supplies multiplied again and again as they gave it out! They experienced the same with their special mixture of Oregano tea as they distributed it. 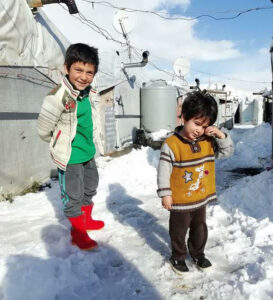 The reports coming in from the limited number of missionaries who did the distribution showed that at least 1,500 families were blessed with what God had provided. Of course, along with the food for the physical body that is shared with the needy refugees is food for the soul as well. People hearing the Gospel and then humbling themselves before Jesus continue to be in large numbers. Even though the Mideast is primarily Muslim, the openness to the Good News of the Gospel is absolutely amazing! Even though we in the West rarely see these type of results, most third world nations are seeing them today. Praise God for what He is doing! 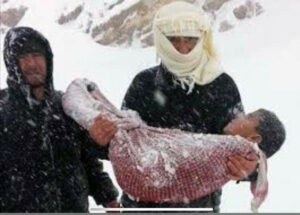 As always, the missionaries reset and rebuild hundreds of tents every week. They were also able to make use of a tractor and bury dozens of the dead. Some of the dead this past few days were children who wanted to play in the snow but were not dressed for it. A number of them got sick from exposure and did not survive. I am told that at least 110 refugee camps were hit by this latest snow storm.

Many of HOB’s missionaries have gone on a water and salt fast here lately, spending much time in prayer. God always responds to His people when they pursue Him earnestly, no matter whether His people are in the East or West.

Pastor R continues to struggle with high fever and other physical difficulties. Let’s continue to lift him up before the Lord. Our God is our Creator and He is the Great Physician!

Thank you all for your prayers and support. God is doing amazing things in these last days of the Age of Grace!