It is amazing to look back over the last two months and see what has already come about in 2020. I believe this year will probably be a year like none other we in our generation have witnessed. We are able to access information from all around the world and for those who are paying attention, it is obvious that things are not normal. Our world has gone through major wars, pestilences, famines, plagues, catastrophic storms, epic floods, civil wars and the rise and fall of empires throughout its history, but never has there been such a convergence of all these things and in such an increasing intensity as we are seeing today.

Today we have multiple world powers converging in Syria. Turkey’s Erdogan appears to be attempting a coup in Syria to bring down Bashar al-Assad. Turkey is also attacking Assad’s military and has managed to kill dozens of soldiers and bring down three of Syria’s Russian built Migs. Russia, who is an ally of Syria, is shooting at the Turks, and has killed a number of Turkish soldiers. Russia has also targeted and destroyed 23 Turkish tanks, 4 Leopard tanks, and about 50 of Turkey’s armored vehicles. The Iranians are also in Syria, and in great numbers. Iran is threatening to fire ballistic missiles at the Turks. Israel, who has endured years of blatant threats from the Iranians, is flying their jets in and out of Syria, bombing Iranian and Hezbollah military targets. Many of these are in and around Damascus. And then of course, the U.S. has thousands of soldiers scattered across the Mideast in several bases. The U.S. Navy is also in the Mediterranean, Red Sea, Persian Gulf, Gulf of Oman, and the Arabian Sea.

This brings us to the status of the House of Blessing. As always, the HOB missionaries have chosen to stay as close to those in need as they can. As all of this fighting is going on and as the military build-up is continuing in the Mideast, the civilians find themselves in an impossible situation. Just since December, approximately 1.5 million civilians have had to flee the Idlib / Aleppo and surrounding region. This is in addition to those that had had to previously flee north toward the Turkish border. Reports tell us that a very high percentage of the refugees are women and children. Although there are many photos of people leaving in all types of vehicles piled with belongings, Pastor R tells me that at least ½ million have escaped with little more than the clothes on their backs. These people have no tents, beds, changes of clothing, medicines, or food. It is a human disaster of unimaginable proportions. Since my last update, HOB missionaries report at least 90 older people and 70 children having died from the flu, exposure, or starvation in their locations.

These are some of the people HOB is trying to reach. The need is much too great for a small missionary organization to meet, but they do with what they have and ask the Lord to multiply it. If nothing else, the missionaries want to at least reach them with the Gospel. That way if they suddenly pass into eternity, at least they have the assurance of their eternal destiny having being secured by God’s forgiveness through the Blood of Jesus. 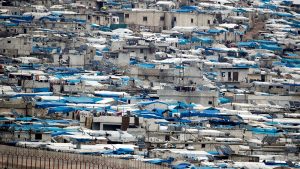 As the refugees amassed in different locations, brothers Omar, Sami, and about 250 additional HOB missionaries intermingled with them in order to share the Gospel with them. The reports that have come back to Pastor R tell of over 6,000 that were reached with the Gospel and each one having prayed the sinner’s prayer with the missionaries. At the same time, Sister Mufiedah and about 120 women, many of them part of the Widow Sisterhood, did the same. They were able to reach between 2,000-3,000 more. All of these people live in great fear and have no hope whatsoever. Once the people recognize that this is the only true message of hope in the midst of the misery and death all around them, they are very responsive and a multitude of souls are brought into the Kingdom of God.

The saving of a human soul is the greatest miracle we will ever witness on this earth, and the Lord has brought in a large harvest of them these last days. There is however the report of another outstanding miracle that I would like to share with you. 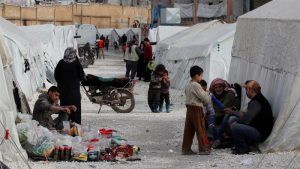 In the region where Omar and Sami were ministering, they happened to run across two UN truck drivers. As they shared with them the story of Jesus, the men quickly responded and in time, they both prayed the sinner’s prayer and became followers of Jesus. They then asked if Omar and Sami knew a good location to deliver the truck loads of wheat and other emergency supplies. Omar and Sami were of course full of thanksgiving to the Lord and directed the trucks to where the HOB missionaries were presently ministering. This was a very special miracle! Not only were two complete truck loads made available to the refugees HOB was trying so hard to help, but it also didn’t cost them the typical $5,000 per truckload! God is so good!! A truckload of wheat will feed many, many thousands of people–at least for a short time. It is a harsh reality, but the missionaries hope, if nothing else, to be able to keep the people alive for a few more meals—which might be just enough time to reach them with the Gospel.

What is going to happen next in the Middle East? I’ve said this many times but wars are coming. Catastrophic Wars. How so sure? Because the Bible is full of details left for us by God’s prophets. The prophecies having to do with the end of the age are especially detailed. The Bible makes it clear that Jerusalem would become the Epicenter of all world attention in the generation when Israel returns to the world stage as a nation again. Jerusalem would in fact become the world’s headache just prior to the return of Messiah Jesus. I find it interesting that even though most of the secular world is well aware that our planet is very near an apocalypse, most of the western Church is totally oblivious to what is about to unfold.

As I write this Update, many nations are sending military forces and they are gathering in the Middle East. Several intelligence sources in the past week have confirmed that 750,000+ troops are being amassed in varied locations throughout the Middle East. These include armies from Russia, several Arab nations, Iran, Turkey, and several western nations, including the U.S., Great Britain, France, and others. Massive armaments being moved into position are not primarily defensive in nature but very powerful offensive weapons. Missile and rocket launchers are reportedly being positioned on many islands. A fourth Russian warship has been sent into the region and an additional U.S. aircraft carrier strike group has arrived in the Mediterranean Sea off the coast of Syria.

How long until something ignites a war? Only God knows but today Damascus is under siege, the Russian embassy is surrounded by the Turks, and Russia and the U.S. are at the greatest danger of all-out nuclear war than since 1983. Personally, I have come to the belief some time ago because of an abundance of biblical and historical evidence that the Four Horsemen of the Apocalypse have been circling the earth and doing their dirty work since the beginning of the Church Age. Today one can hear the deafening sound of the heavy hoofbeats of these Horsemen as they approach to complete the final stampede of their assignment. The Restrainer is soon to be removed from this world so that the Evil One can finish gathering those to himself who insist on rejecting Jesus Christ.

You and I who are committed disciples of Jesus  have a very short time in which to finish well. Many of you have been faithful supporters with both financial gifts and prayer for several years. Thank You!