One of the things I’ve noticed while writing these Mideast Updates for the last 53 months, is that if I am not careful, the updates become “routine” reports. This is a grave mistake because these are not “numbers” being reported, but rather a written record of events and the people who are the subjects of these same events. These people who have become House of Blessing missionaries, are not that different than you and I. Yet, the circumstances they live under are very different from most of ours. God knows that we’re flesh and cannot possibly know every one of the individual people who are brought into the storyline of these updates. He does however expect us as believers and followers of Yeshua to go beyond just being concerned with our personal lives and agendas.

Philippians 2:1-4 presents us with an important guide for Christian living. It reads like this:

Therefore if there is any consolation in Christ, if any comfort of love, if any fellowship of the Spirit, if any affection and mercy, fulfill my joy by being like-minded, having the same love, being of one accord, of one mind. Let nothing be done through selfish ambition or conceit, but in lowliness of mind let each esteem others better than himself. Let each of you look out not only for his own interests, but also for the interests of others.

We are looking down the barrel of the end of this age. Whatever we would like to have in God’s record books about how we have lived our lives and how we have lived out our commitment and obedience to Christ, needs to be done now. Our lives are not based on legalism as is the case with mere religion, but on love–God’s love. We love the Lord our GOD with all of our heart, mind, soul, and strength…and our neighbor as ourself. So, this love shared between us and our Father is then shared with mankind, especially those of the family of faith.

People often wonder if the Middle East will ever find peace again. No, it will not…at least not until the Prince of Peace Himself comes. Jesus Christ, as GOD / KING will bring universal peace and will enforce it. He will retake physical control of this fallen planet, taking it back from the fallen Lucifer, who had authority over the earth handed to him by Adam at his fall in the Garden of Eden. This is part of the reason why Messiah Jesus is called the second Adam in Scripture. 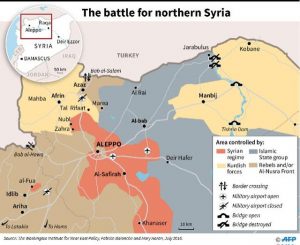 There are a plethora of reasons given for what is going on in the Middle East, and many of them are based on at least some truth. There are many layers to what is unfolding in this part of the world today, but at the very core of all conflict today is the fact that Israel is now a nation again and finds itself surrounded by enemies that are sworn to its utter destruction. Prophetically, God sees the world with Israel at the center of the earth, Jerusalem its epicenter, and the temple mount the bulls-eye. Jerusalem is the only city on earth that has God’s name upon it. It is because of God’s eternal commitment to Jerusalem that the devil will do anything and everything possible to thwart God’s plans for His Holy City and the people of the Land. The struggle for control of the the Middle East will continue right on through the Apocalypse itself, culminating in the infamous Battle of Armageddon.

What does all this have to do with these Mideast Updates? It is in this boiling cauldron that the House of Blessing missionaries find themselves today. Through the news services we might hear about the cities of Aleppo, Idlib, and Damascus, Syria. We might also hear about the Iraqi cities of Baghdad, Mosul, Fallujah, and Ramadi, among others, and for the most part, we might think that what happens there has little effect on most of the rest of us. Yet, these brave loyal missionaries are there on the front lines and face death every day. Even those that have an opportunity to relocate to safer areas, choose not to. Their motivation is the fact that there are tens and hundreds of thousands of people who are facing a godless eternity when they die. These missionaries willingly sacrifice their own lives for the sake of the lost. All that they ask is that we lift them up before the throne of grace in prayer. 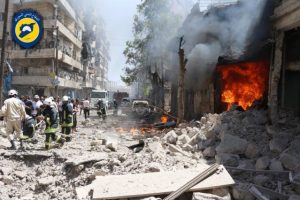 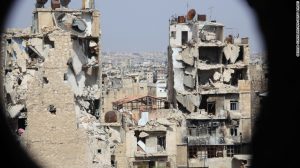 The Aleppo area continues to be under siege. The mainstream media does not give much coverage, but through alternative news outlets one can see what is happening in reality. People are trapped by the hundreds of thousands and starvation is hitting hard. The missionaries are embedded throughout the area in order to be where the need is the greatest. This is also where it is the most dangerous. Just since the last update, there have been another twelve new believers lost, eight women and four men. There was also a complete family of eight that were in a house that was hit by a missile strike. Nothing was even left of the people to bury.

But, in spite of the losses, at least 500 believers continued finding ways to meet for times of communion and worshipping God! Sister Mufiedah and her widows were also able to minister to at least 21 more critically injured people. Each, as is usually the case, also became a follower of Yeshua.

Sister Sarah has stayed very busy, sharing her testimony again and again of seeing her dead children in the presence of Yeshua. There are many people who are especially touched and comforted as she shares with them where the dead in Christ are. There are so many people who have lost children! This is a source of grief, maybe like none other. 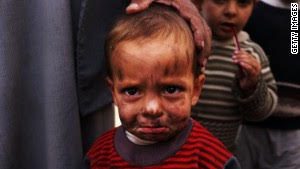 In the Fallujah area, another four HOB missionaries were killed and eight of the newer believers. Sister Fatima is continuing the communion services. Due to the pressures of war, they have not been able to meet in as great numbers, but yet have at least 800 attending as often as they can. In Mosul it continues to be very difficult, and getting worse. Another ten HOB missionaries were killed in Mosul as well as over forty more of the newer believers! Tragic, yet every single one of these followers of Yeshua now find themselves in the presence of their LORD and Master.

Each of these folks that have lost their lives are family members to someone. We need to pray for the families. As fellow believers we need to put ourselves in the shoes of these folks and not just casually mention them in prayer, but really intercede for them.

I am told that due to the deteriorating conditions on the ground in most areas of the Middle East, the missionaries are approaching the people in a little different way than before. Most of the people live in great fear. Most also expect to be killed sooner or later. They see no way out. So, the HOB missionaries don’t beat around the bush with their message. They tell the people that since they expect to die, they need to see to it that they have made the proper arrangements with the real Messiah, and do it immediately. This life may not be worth anything to them, but an eternity in God’s heaven can be assured. That assurance  must be appropriated through the Blood of Jesus Christ, the Nazarene. The people are responding by the hundreds. They aren’t doing so as an escape from hell as much as accepting the opportunity to live in the presence of their Creator and the glorious eternal life that becomes their inheritance. There may be something that we in the West can learn from these folks. Many of us live in relative comfort and peace–at least for the time being. This makes it more difficult for us to realize that the things of this world are all going to disappear. Do we really see the eternal value offered to us if we’ll totally sell out to the Lordship of Jesus Christ? Or do we just say the words and go through the motions?

All of us as true followers of Yeshua must die to ourselves, not just those in persecuted areas, but all of us. Time truly is very, very short.

Thank you all again for your prayers and support for House of Blessing. Thank you also for your special intercession for Pastor R. He has not been released from the hospital yet, but is recuperating. God’s timing for his release will be perfect, as it always is! We serve a GOD who is always in complete control, regardless of how it may look to us. Someday when we’re in His presence, we will recognize this.