The death toll in Syria is now nearing 600,000 according to some estimates. I have not been able to find any statistics for Aleppo and its surrounding area. The reports coming out of this region of Syria, however, are horrific. Clarissa Ward, a CNN correspondent who has reported on wars for more than a decade, provided a testimony to the UN Security council earlier this month. In her report she said that in all of her experience covering war, including Iraq, Afghanistan, Gaza, and other war zones, she has never seen anything anywhere close to what is happening to Aleppo. Reports say that the conditions have only gotten much worse since Russia has become involved in the conflict in support of the Assad regime. 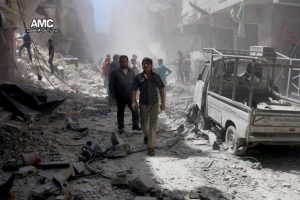 Correspondent Ward described the contrast in what she saw in 2012 to what she has witnessed this year. She said that the scene had worsened drastically. The “apocalyptic landscape” had become a “moon landscape”. She said she saw “nothing but dust, rubble, and gray. Entire city blocks were razed to the ground. Buildings, apartment buildings with no walls, still sort of hanging suspended. But, no walls, uninhabitable. It didn’t seem like life could exist there. And yet it did.” Syrians say that Russian airstrikes have hit hospitals filled with innocent civilians, killing men, women, and children. One of the greatest issues has been incendiary weapons being used, not only on military targets, but also on civilian areas. Another development has Russia asking permission of both Iraq and Iran to allow cruise missiles to be fired over their territories at Syrian targets. ISIS targets are being attacked in Aleppo, Idlib, and Deir el-Zor provinces.

The calls I am receiving from Pastor R in Syria confirm the facts that we hear from current overseas news reports. Sister Mufiedah and the “Widow Sisterhood” continue ministering to the injured. They minister healing to them and then also lead them into a relationship with the soon coming Messiah and KING, Jesus Christ. 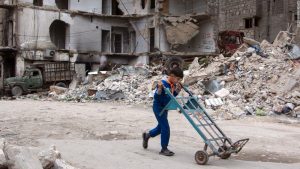 Among the hundreds of dead every week, I was told that 14 new believers, 8 of them children, and 3 HOB missionaries were killed in the last few days. Yet, while the reports came in of those killed, reports were also received of the 1,100 who were served communion by Sister Hafezah and those helping her. As has been shared so often, these communion services are the only place where the believers are able to meet, where they can try to tune out the sounds of war, and receive refreshing as well as comfort from the Holy Spirit. In the midst of all the carnage and chaos, the believers praise and worship God into the early hours of the morning.

Sister Sarah also has continued sharing the love of God with all those who listen to her testimony of being taken into God’s presence and seeing her own child totally restored and in the presence of the God.

Even though there is starvation and death all around and the promise of much more of the same, hundreds of people are committing their lives, in fact, their eternity, into the hands of the only One who can forgive their sins and set them free. Faith in God is what rules, not fear of circumstances on the ground. 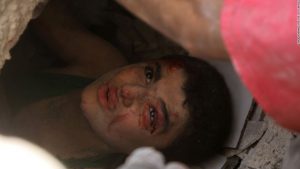 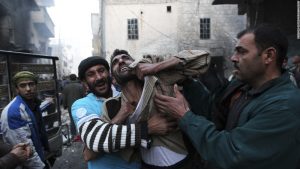 In Fallujah and its surrounding area, the work of the ministry also continues nearly all hours of the day. The situation on the ground is not good, in spite of the fact that ISIS for the most part has been run out of the city. Dangers still lurk everywhere and, of course, the dark ages brutality is not confined to members of ISIS. There are dozens of other jihadist groups that are more than willing to rape, torture, maim, or kill in the name of the demon god, Allah. At least 8 new believers and four more House of Blessing missionaries were lost since the last update.

Sister Fatima and those committed to working with her continue ministering to anyone they get a chance to share the love of God with. Communion was shared this last week with over 900 believers, many receiving healing and experiencing the baptism of the Holy Spirit. The 26 widows that are going through intensive teaching and healing are gradually recovering from their horrors at the hands of ISIS for several months.

In Mosul, things continue to deteriorate. The military build-up continues for the attempt that will soon be made to break the ISIS hold on this major city. Sadly another 25 believers and ten HOB missionaries were lost this last week, but they are now in the presence of Yeshua. Thank God for our eternal inheritance through the Blood of Jesus.

In conclusion, Pastor R is out of the hospital and is busy overseeing the work of the hundreds of House of Blessing missionaries. As funds become available, needs are met. It is even possible sometimes to purchase some wheat to distribute to the starving. As the missionaries share their meager supplies with the unbelievers, they have an open door to share about the love of the true God, Yahweh, and the soon coming Messiah, Jesus Christ.

Things on the ground have deteriorated so much that few people really expect to ever survive. Because of this, some of the evangelism has taken on a bit of a different tone. The missionaries, referring to the hopelessness of the people, encourage them to make sure their eternities are secure with the only One who has provided for the forgiveness of sin and can offer an eternity in the paradise provided by God for those that are the true people of God. The people are responding by the thousands.

We continue to have the privilege and opportunity to take part in this great work through our earnest intercession and support for these committed HOB missionaries and believers. God has not seen fit for most of us to have been born into the chaos of the Middle East, but He has sovereignly seen fit for us to be born into lives that, in comparison to most in this dying world, are quite well provided for. All we have been blessed with is truly only on loan from our Master. If He asks for us to contribute, even if it is a sacrifice, we must respond. It is what we have been called to!

Thank you all for your faithful prayers and support. Some of you have responded generously. May God bless you abundantly. He is well aware of the generosity. In the little time left, the need is very great, and a multiplication of funds is needed. Many thousands have no access to the written Word. These people of God hunger for a copy of the Scriptures to study as God has directed.