In an update a few days ago, it was reported that in some locations within Syria there are often several military entities within hand-grenade distance of one another. Because of this, a small force of Americans has been deployed into the Manbij area. Their task is to ensure that the different parties in the area don’t attack each other–especially Turkish and U.S. backed forces. The Syrian battlefield is very complicated and a mistake or miscalculation could lead to catastrophic consequences. Quite often varied forces are fighting very close to each other. At times, the missionaries are caught in a crossfire as was the case with Mufidah and the seven widows that were the subject of the previous update, “Story From Syria.” 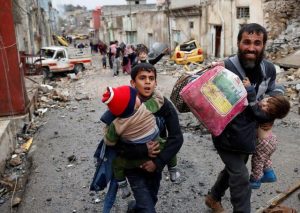 As believers in Jesus, we depend on His covering and protection every day in this fallen world, but it is a very real and quite literal moment by moment practice for the HOB missionaries. Not one of them knows if they will return alive to where they slept the night before. As we read in the previous story, God, in answer to prayer, miraculously spared Mufidah and those with her. Yet, they willingly go out each day to fulfill their assignment to spread the truth of the free gift of grace made available through the Son of God.  Mufidah reports that the Lord brought twelve more injured to them last week and another ten injured to Fatwa. The two women, along with their group of widows. ministered to them and all 22 are now in the process of healing. Each of these have humbled themselves before the Messiah, received forgiveness of their sins, and are now brand new believers! These 22 are part of 130 that have been brought to a knowledge of Jesus Christ and whose names are all now recorded in the Lamb’s Book of Life.

(NOTE: Photos do not necessarily have a direct connection to the narrative in the update, but come from my files and do have to do with current events in the Mideast.)

Sadly, this latest report records another eight of the believers having lost their lives in the service of their Master. I trust that none of us sees any of these people as just another statistic. We have gotten used to hearing a weekly tally of souls reached and those that have fallen. We rejoice that those that have died are now in the presence of their Lord. But, they are missed by those that loved them.

Elsewhere in Syria, the Spirit of God continues bringing the lost to a place where they can hear the Good News of God’s love through the Messiah, Jesus Christ. The three mosques in the Damascus area which we have mentioned in several of the latest Mideast Updates, are continuing to be used to teach over 2,000 new believers. Between them all, they have put some money together to purchase some tables and chairs. This last week, they put another $1,500 together so that mass copies can be made of teachings HOB has been using for their School of Ministry students. These teachings include full Scripture verses which will be memorized for evangelism. Previous graduates of the School of Ministry are doing the teaching. There is great excitement about finally being able to learn the Truth about what this life is really all about as well as eternity! Among the most enthused are the four head sheikhs that recently became followers of Jesus! Praise God for His goodness, and for the way the Holy Spirit is moving.

As the work of Omar and Same continues with the mosque converted churches, Sister Sarah continues following the leading of God’s Spirit, moving from place to place as God sends her. She has some strong believers that travel with her and help her minister to the crowds. Her ministry, you will remember, is directed toward those that have lost children and close loved ones in this horrendous civil war. The Lord gave her 170 with whom to share her special testimony this past week.  She and those with her then pray with as many as wish to be prayed for, also praying to become part of this great Last Day’s Harvest!

In Fallujah, Adel, Haleb, and the other HOB missionaries continue ministering to any and all as God continues bringing hundreds that have lost all hope in this life. The Good News contained in the Bible gives new hope, and best of all, complete forgiveness, and an eternal inheritance! There is no greater news anywhere! In the last few days, eleven believers have been lost but there were at least 80 who received Jesus as Messiah. These 80 will gradually be trained as House of Blessing missionaries.

Then there is Mosul. Much has been said and shared about Mosul in these updates. The battle for complete control continues, with the eastern side of Mosul having been retaken weeks ago, but with the western side still not freed from ISIS. Up to about 700,000 civilians are still trapped in western Mosul. The ISIS leader Baghdadi is reported to have left Mosul and the western side of the city is being held by 2,000-3,000 of his fighters. The Iraqi military and the coalition working with them are very close to the Old City but are now facing the most difficult part of the fight. ISIS is determined to do as much damage and kill as many innocents as they can before they are driven out or killed. The army forces moving in the direction of ISIS controlled areas are trying to move very carefully because of the great danger to the civilians. There is great concern that there is going to be great loss of life as ISIS uses civilian areas as cover from air strikes. 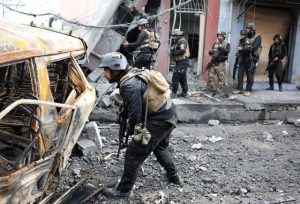 Akram and Mustafa, the House of Blessing leaders in the Mosul area, are very close to all the military action. They personally confirmed at least 150 civilian deaths in the last three or four days. It is a very troublesome scene. But, God has been bringing them many souls regardless of the chaos and carnage. At least 250 more souls have been reached since the last update.

As I close this update, I want to mention that the communion services in both Syria and Iraq are continuing. It is not possible for these services to be held everywhere, but both Hafezah and Fatima are continuing and they are gathering the believers by the hundreds. Over 900 gathered with Hafezah and another 800 with Fatima. These ladies of course have many helping them with such crowds gathered. I would love to witness one of these great communion services! What an experience that would be! It is a blessing that there are those from around the world that are responding to the great need for finances. HOB has been able to keep the supplies coming so that these special services can continue. 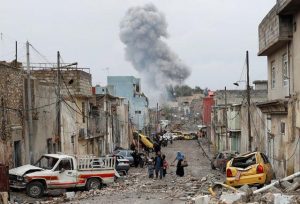 I also want to shout out a great Praise to our Lord and Master for the special amounts of money that He has made available from the most unusual sources…right on the battlefield. Only God can do such a thing! As a result, the 56 widows rescued from 2 years of sex slavery to ISIS are now being ministered to again in a place aside from everyone else. Sister Miriam and ten volunteers are giving these 56 women 24 hour attention, support, counsel, prayer, and teaching. Their healing is progressing. In addition because of the finances God has brought in, another four large truckloads of wheat have been purchased and distributed in the several areas where they are needed the most. Many souls will be reached as a result of the believers showing their love in this way. Thank you again to all who are so faithful to pray and give. God is multiplying every dollar and many prayers are being answered. Thank you everyone.

Please continue to pray for Pastor R as he has a great responsibility in providing counsel, guidance, and leadership for the hundreds of HOB missionaries and the multitude of believers under the HOB leadership. Pastor R is quite susceptible to colds and the flu. But, God is more than able to keep Him covered. As we pray, the Lord will strengthen and encourage him.