In light of the fact that readers have often expressed interest in how Bible prophecy ties in with current events today, and especially how it affects the work of the House of Blessing missionaries, I will interject some thoughts along that line with this update of HOB recent activities.

In the past week, the world has witnessed a most amazing event: the declaration by the president of the United States, Donald Trump, that the city of Jerusalem is the historical ancient capital of the Jewish nation, and is today the capital of the modern nation of Israel. As monumental as this announcement made on December 6, 2017, it is actually a continuation of a great End of the Age saga predicted by Old Testament prophets thousands of years ago to unfold just prior to the return of the Messiah, Jesus Christ.

Knowing “what time” we are living in today, we are not surprised that Jerusalem is such a focal point of contention. The prophet Zechariah described what he saw coming at the time of the end of the age:

“…Thus says the LORD, who stretches out the heavens, lays the foundation of the earth, and forms the spirit of man within him: ‘Behold, I will make Jerusalem a cup of drunkenness to all the surrounding peoples when they lay siege against Judah and Jerusalem. And it shall happen in that day that I will make Jerusalem a very heavy stone for all peoples; all who would heave it away will surely be cut in pieces, though all nations of the earth are gathered against it. ‘“ Zechariah 12:1-3

The conditions in the Middle East will not get better even though President Trump spoke true words. The battle for the control of Jerusalem will continue to escalate. There will continue to be talk of peace, and there will be peace plans offered for consideration, but in the end, the only thing that will bring real peace, not just to Jerusalem and the Mideast, but to the entire world is the second coming of Jesus Christ, the Prince of Peace.

The conflict which surrounds Jerusalem today and which will increase in intensity in the days ahead, also embroils the entire Middle East. The House of Blessing missionaries, although not aware of all the details of how Bible prophecy will unfold around them, are still very aware that God’s time of grace is quickly running out. Knowing this, every effort is being made to reach as many souls with the Good News of God’s forgiveness that has been made available through the Blood of Jesus. Sometimes this is done by preaching, other times by visiting individual tents or wherever people are making their homes in these difficult days. 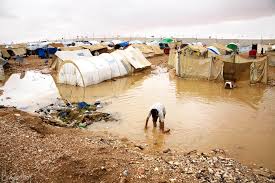 As winter begins making its presence known, tents are already collapsing from the winds and rains. Mattresses and clothing are getting wet and the missionaries are again finding many opportunities to share the love of God with people in practical ways. This always opens the door to tell them about the real Messiah; the One who was crucified and resurrected 2,000 years ago for the sins of the world. Exposure to the elements of course also brings much sickness to the refugees. Pastor R and the missionaries spend many hours a day praying for the sick. As they do, they really have to depend on the Lord helping to keep them from catching the same sicknesses as the people they pray for.

Along with all the challenges with exposure to the elements, lack of food and safe water to drink, there is also the continual threat of bombs or missiles, mainly from the Russian forces and their allies. Even though there is talk by Vladimir Putin of Russia that the war against ISIS and other terrorists is pretty much over, there are still hundreds of bombing runs being made per day, particularly in Idlib province. Wherever a potential target is spotted, missiles are fired or bombs are dropped, regardless of the civilian population. Mufiedah and Fatwa continue ministering treatment and healing to dozens a week. This last week they treated about 34 of the injured and then helped all of them as they prayed the sinner’s prayer.

The call from Pastor R this week was a bit shorter than usual and so I don’t have as many details, but I am able to report that all of the HOB School of Ministry classes that had been ongoing have now been completed. As a reminder, there were 280 in Fallujah, 350 in Mosul, 220 in Iran, 300 in Kurdistan, and 450 in Tal Afar. These have all received their certificates and will be going out as fisher’s of men. These of course, you will remember,  join the hundreds studying with teachers Omar, Same, and three others, as well as hundreds more with Sister Sarah and the teachers who helped her, who completed their courses in and around the Damascus metropolitan area. God is good!

Becoming a “fisher of men” in hostile locations like in the middle of the Muslim world, has a much different reality than graduating from Bible School here in the West. Here, graduates look with great expectation and excitement to wherever God opens a door for ministry. These graduates in the Middle East however will be walking straight into a lion’s den. And, they go out in total faith. None of them receive a salary or support. Whatever the Lord makes available is what they have, whether it is food to eat, clothing to wear, or even a Bible. Bibles are in constant short supply. It is difficult for those of us who have been so blessed to imagine being in such circumstances. The least we can do is pray for these of our brethren who do not have it so easy.

In closing I would like to draw our attention to a passage of Scripture I have used before. Psalm 2 is a fascinating psalm but today I would just like to apply the first three verses to today’s update.

Why do the nations rage, and the people plot a vain thing? The kings of the earth set themselves, and the rulers take counsel together, against the LORD and against His Anointed, saying, “Let us break their bonds in pieces and cast away their cords from us.” Psalm 2:1-3

Today is December 11, 2017 and we live in the perilous times the Apostle Paul warned Timothy about. The god of this world knows his time is now very short and those that choose to rage against the God who created them will find themselves under the control of a malevolent being who has a hatred for human beings that none of us can even imagine. This diabolical hatred is especially aimed at the Jewish people. It was the Jewish people that God chose as the vehicle through which to bring the Messiah into the world. And it is these same modern day descendants of Abraham, Isaac, and Jacob whom the Messiah will rescue from the satanically inspired all-out attack by the combined armies of the world in the Valley of Megiddo. Satan intends to finally annihilate these people of God and remove any remembrance of them. Is this not exactly what Adolph Hitler tried to do, and is this not exactly what is threatened by Ali Khamenei, the Supreme Leader of Iran? And, is this not also the battle cry of Islamic militant groups scattered around the world, especially those who are close neighbors of Israel, like Hamas and Hezbollah. They all say that every memory of the Jewish people will be erased from this world. But God is in conflict with them! The prophet Ezekiel gives us a description of God’s response to the threat against Israel from Russia and its Islamic allies in our time. This is what Ezekiel was inspired to write:

“And it will come to pass at the same time when Gog comes against the land of Israel,” says the Lord God, “that My fury will show in My face. For in My jealousy and in the fire of My wrath I have spoken…” Ezekiel 38:18-19

The demonic drive to remove the chosen people from the land God gave them, as well as from the entire face of the earth, will never end until Jesus returns and sets the world straight. Until then, the events Jesus warned us would unfold at the time of the end will continue and the intensity of the pre-tribulation birth-pangs will increase. We as the Church cannot change the direction of the world but we can finish the task God has called each of us to in this life, and we can finish well. We all desire to hear the words, “Well done, good and faithful servant, welcome to the joy of your Lord!”

Please keep the House of Blessing in your daily prayers. We serve a prayer-answering God. For those that would like to help in the ministry of the HOB missionaries, a PayPal button has been provided below. Thank You!