In the New Testament book of James, we find these words:

13 Come now, you who say, “Today or tomorrow we will go to such and such a city, spend a year there, buy and sell, and make a profit,” 14 whereas you do not know what will happen tomorrow. For what is your life? It is even a vapor that appears for a little time and then vanishes away. 15 Instead you ought to say, “If the Lord wills, we shall live and do this or that,” 16 but now you boast in your arrogance. All such boasting is evil. James 4:13-16

It is easy, especially for those living in safer places on this planet, to lose sight of how tenuous our physical lives really are. Not only does the reality escape us, but we are often guilty of making our plans–big and small–without allowing the Master to actually be “Lord” in the things we have planned. Not one of us has any idea what will actually happen from one minute to the next.

All of us hear of the sudden things that happen, things that were totally unexpected. And, these sudden events happen to believers and non-believers alike. A person may walk across the road to get the mail from their mailbox and, not seeing the fast-moving vehicle coming down the road, within a split second find themselves having entered into eternity. Another person, a total picture of health, suddenly has a heart attack and leaves this physical world for an eternal spiritual one. A family might be sitting in their home eating supper together and a thunderstorm spawns a violent tornado which uproots a large tree outside their house throwing down it through the roof on the house, crushing the family inside. 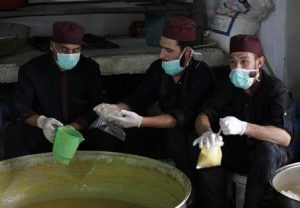 This is how it is living on this fallen planet. Fallen man deals with the curse which has brought sickness, disease, pain, droughts, famines, pestilences, hatred, murder, war, and death everywhere. Until the Prince of Peace comes to set up His Kingdom of Righteousness, and the curse of sin is broken, this is the way it will be.

For most of the world’s population today, living under tyranny, civil war, or even wars coming from twisted religious philosophy have been a normal way of life, at least, to one extent or another. For the Western World, particularly the United States, most of these things have been overseas and have not directly affected the homefront. This is soon to change. We, particularly believers still living under better circumstances, must remember to thank God for the blessings we have been living under. The Godly blessing we are still experiencing comes from a price paid by earlier generations. As I observed the Independence Day celebrations across America this year, I am reminded of a year’s worth of news reports that show how many millions have forgotten where the blessings come from—and particularly, from Whom they have come.

(Photo: one of the tens of thousands of bombings of terrorist positions within Syria) 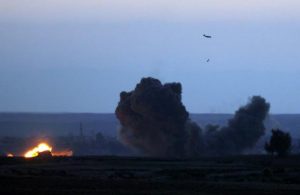 This brings me to the most recent phone call I received from Pastor R. He said something a few days ago that has not left my mind since we fellowshipped together over the phone. He commented that the poorest and most destitute of the believers within the House of Blessing community, often are the strongest and least affected by the lack of food, fresh water, medicine, or even shelter. They are living under trees and making some sort of dish out of what grass they can find in order to sustain themselves a little longer. Their joy in their relationship with the Lord is a testimony to the power of the Holy Spirit within an individual life to overcome any adversity.

Some of the most destitute within the HOB community of believers today is in northern Syria, from Idlib / Aleppo region all the way north to the border of Turkey. Most of these folks have had to flee their homes and make shelter wherever they can, many thousands of them under groves of trees where they can find them.

One of the other hard hit areas is in the Kurdish region of Iran. The HOB community there continues to grow but Iran’s economy has been hit hard and as usual, it is the most innocent of the population that gets hit the hardest. This is even more so for those who are believers in Jesus Christ. The practice of Christianity, as we well know, is not allowed in most of the Mideast, especially in Iran. Two of the main House of Blessing leaders in this area, brothers Sahbander and Mortadah are faithful—even to death if it were required of them, and the work of their ministry will continue as long as they are able. More families are added to their community of believers as each week unfolds. This last week it was another 25 families.

In northern Syria, thirteen of the new believers were killed during the bombings. Four women, three men, and six children. Among those killed were one whole family. The missionaries also treated another fifteen men, twelve women, and thirteen children who were injured. They are cared for with whatever supplies HOB has. Sometimes that is very little.

All in all, the HOB school of ministry is doing well. This includes the large group of former ISIS militants and their families that were reached with the Gospel not long ago. The students are very anxious to learn and take their studies very seriously. Most take the Scriptures home with them after an intensive day of learning and they memorize them as part of their homework.

The group of 69 former sheikhs have been studying long and hard and have decided to take a break now and spend some time in prayer, asking the Lord what He would now have them now do with all that they have now learned. We know that the Lord will guide each one of these men into the work that He has planned for them.

There was a particularly interesting event a few days ago. During one of the communion services held by sisters Hafezeh and Ferial, a family of over 25 people who had been separated for years, found each other at the communion service. This family had been reached with the Gospel over five years ago and then through circumstances of the civil war, became separated and couldn’t find each other. At this communion service they were again reunited. It was a picture of the great grace of God! The Lord had sustained each of them and in spite of having been separated all these years, their love for God had continued to grow and He never left them. Now, they are once again reunited. It would be quite interesting to hear each of these folks tell their stories of what all has gone on in their lives during the years of their separation.

For many people, the events of the past few years in the Mideast has brought great tragedy, loss, and separation of families. Many will not find those that have been lost may not be found on this side of eternity, but the return of the Messiah is now very near. There is soon to be a very great reunion of all God’s people and no matter the tragedy and hardships experienced in this short physical life we all live, it will prove well worth having trusting our lives into the hands of the One who made us all. The eternity God has planned for those who love Him will be glorious and beyond our ability to even imagine!

As we watch the world seemingly begin to spin out of control, let’s remember that God is still in control of all things. Bible prophecy must be fulfilled, which means that there is soon to come a time when evil will be allowed to run its course on this earth. The Bible teaches us however that this time when evil will be turned loose, is a very short period of time. God Himself will intervene and Messiah Jesus will return to this earth along with the saints of God whom He will already have gathered to Himself at the time of the Rapture, and set up His 1,000 year kingdom. Soon and very soon, we will see our KING! Praise God!

Be encouraged and stay strong in the love of our Lord and Savior. Let’s all determine to finish well. Heaven is just around the corner!

There are those who have requested some of the older House of Blessing stories be reprinted. I am gathering a few of the top stories from years past and will reprint them one at a time so that we can be reminded of God’s faithfulness in the lives of His people. The first should come out within a couple days. Be watching…

For those that would like to help with the work the House of Blessing does, please find the convenient PayPal button on the homepage. All funds received go to the work of the House of Blessing missionaries. The need is great. All of HOB continues to thank God’s people for their generosity with their support, and especially for their prayer support. God answers prayer!!