In the years I’ve been writing updates for the House of Blessing, I don’t have any idea how many stories I’ve passed on told to me by Pastor R. There have been stories of great tragedy and hardship experienced by so many and then there are the many stories of God’s intervention and the miracles He has provided. Today’s heart wrenching story has elements of both. 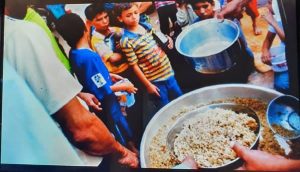 As regular readers will know, HOB’s missionaries have been distributing a tea composed of a special mixture that appears to have helped a great many people quickly overcome the effects of the Covid 19 virus and also those with the flu. The virus has hit the crowded camps pretty hard but the flu is a serious problem every year. Brother Omar was given the ingredients in a dream weeks ago and HOB has been distributing to as many as they possibly can. Many might question how something so simple could be so effective but with the great results they have had using Omar’s ‘prescription’, I would be the last one to question whether Omar really heard from the Lord!

As Mufiedah, Sarah, and Fadwa were walking from tent to tent distributing the tea, Mufiedah heard a woman crying in one of the tents. When she went inside, she saw a young woman sitting on the floor near a dead body and sobbing uncontrollably. When the woman was finally able to talk, Mufiedah asked her who the dead person was. She said it was her father. Then, she began to tell her story…

Six and one half years ago, when she was only sixteen, her mother and her brother were killed in a Syrian bombing. That left only she and her father. Soon after, her father caught sight of her taking a shower one day, grabbed her and raped her. From that day on he never stopped. Repeatedly, he would tie her up and use her however he wanted. She had no way to escape and even it she had, there was nowhere she could go. What made her situation much more tragic yet than the unending physical abuse she had suffered from her father was the fact that now at 23 years old, she had had to deliver three boys born of this incestial relationship.

Now that her father was dead, she was free of the physical abuse but had no way of supporting herself, let alone these three young children. In addition to it all, she had no desire whatsoever to raise these children that had been the result of all these years of being raped by her own father.

The young mother’s name is Namade. As she told the story to Mufiedah, she explained that her crying was not from grief. It was from the deep shame she had been carrying because of what her father had done to her.

As Mufiedah was able to calm Namade down, she gradually told her of another Father, one that truly embodied what the word love means. This was a Father who sent His own Son to intervene in the affairs of the human race, even letting them kill Him by nailing Him to a cross. Why would He do that? So that He could pay the price for the sins of all mankind that no one on earth could pay. He through His sacrifice became the perfect Lamb of God. I am sure Namade was told of what the prophet Isaiah had to say:

“…it was our grief He bore, our sorrows that weighed Him down. And we thought His troubles were a punishment from God, for His sins! But He was wounded and bruised for our sins. He was chastised that we might have peace, he was lashed—and we were healed! We are the ones who strayed away like sheep! We, who left god’s paths to follow our own. Yet God laid on Him the guilt and sins of every one of us! He was oppressed and He was afflicted, yet He never said a word. He was brought as a lamb to the slaughter, and as a sheep before her shearers is dumb, so he stood silent before the ones condemning Him. (Isaiah 53:4-7 Living Bible)

After expressing her own desire to accept Jesus as her Messiah and Lord, Mufiedah helped Namade pray the sinner’s prayer. Even the boys, as young as they are, prayed it along with her. In time, these young boys will understand more fully what it is that they prayed along with their mother. The Holy Spirit understands their little minds and  limited understanding and will guide them. Namade and the three boys were then baptized after accepting Jesus as their Messiah and Lord.

As Pastor R finished telling me this story, he asked for special prayer for Namade. He said it was going to take much healing for Namade to overcome the years of abuse. The greater battle would be for her to be able to truly accept these boys as her own and nurture them as their mother. How is she going to be able to do this— especially in a culture that naturally throws someone like her aside as permanently defiled and worthless. And then there are the boys who had no part in how they came about. 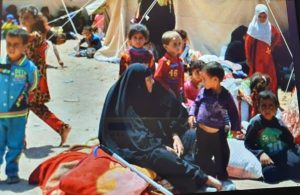 The best that Mufiedah could do for the time being was to put the three boys in one of HOB’s unofficial refugee ‘orphanages’. There they will be able to be among other children and will be cared for. All of the children are also taught Bible stories, just as we would in our church Sunday School classes.

We hear of a story like this and are horrified that something like this can happen. But, this story or others much like this, are happening all over the world. In war-torn areas where families have been torn apart and life cannot be lived under normal conditions with the benefit of even the normal societal restraints, deviancy is much more prevalent. 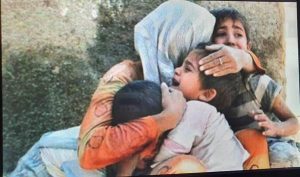 So, please pray for Namade and her three boys. The photo I have included is real. Of course, Namade did not want her face seen and had it covered.

When Pastor R called, he also provided the numbers of all of the different missionaries distributing the special oregano/garlic tea to multitudes. In order to get this belated update out, I will not go into all the numbers today but suffice it to say that it is being distributed to many thousands, as long as their supply holds out. Each camp is having to deal with the dead but the reports of those being healed of both the virus and the flu are prodigious.

In conclusion, I think most all of us know we are living in the perilous times described by the Apostle Paul to Timothy. For those of us in America, many are disappointed that this election has produced such a conflicting and questionable result. Others feel just the opposite. Christians need to make sure that political strife does not separate us from the love of God and also from our love for one another. These are trying times. But, rather pining around for what may or may not happen, we must continue to share the love of God with anyone we have an opportunity to share it with, especially as we live in anticipation of the return of Jesus Christ for His true Church.

I am going to close with a quote from Sean Osborne of the website, Eschatology Today:

We are going to watch events in the Middle East centered upon the secular and yet unbelieving State of Israel. We will have an eye to the global pandemic and other pestilences yet to emerge. We will watch the continuing rise of the kings of the East. We will keep an eye to the skies and heavens above for potential impactors. And we will call out the coming official announcements of “alien visitations” for what it is, demonic deception. We will watch the rise of the ten toes and the little horn spoken of by the  angel Gabriel to the prophet Daniel. We will watch weather patterns change and the roaring and tossing of the seas, not because mankind is responsible for them, but because God Himself is shaking the heavens…This is Bible prophecy.”

Please continue to keep the House of Blessing in your prayers. Thank you all that have been doing so and for the support many of you share! God is good!